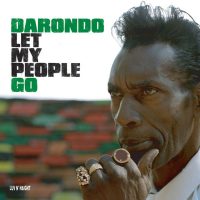 The late Bay Area vocalist Darondo flared brightly and briefly from 1972 to 1974, releasing three swanky singles and opening a show for James Brown before exiting the music biz. In the ensuing decades, Darondo’s life took an unpredictable path that led him into television hosting, working as a physical therapist, and getting hooked on cocaine, before he eventually circled back to singing in his 60s, thanks to Costa Mesa-based Ubiquity Records sub-label Luv N’ Haight re-releasing his small output with bonus tracks on the tight and wonderful collection Let My People Go. I’m glad I had the pleasure to see William Daron Pulliam perform in Costa Mesa in the late ’00s; he could still sing and dance like a man half his age. Sadly, he passed away in 2013 at age 66.

If the opening title track doesn’t get your libido throbbing, you may want to see a doctor. It’s low-slung, sexy funk that swings like an elephant schlong, with Darondo’s voice exuding a weary vibrancy that effortlessly oozes soul, not unlike Al Green’s and Curtis Mayfield’s. But wait, it gets better. “Legs (Part 1)” is simply one of the most prurient funk jams extant, like Commodores’ “Brick House” multiplied by AWB’s “Schoolboy Crush,” but much cooler and more understated. I’ll go out on a limb and call it better than more famous lower-extremity-worshipping songs such as Rod Stewart’s “Hot Legs” and ZZ Top’s “Legs.” As a bonus, it boasts one of the filthiest falsetto performances on tape. Sadly, I don’t think Part 2 ever got released.

For a change of pace, swoony, swaying soul ballad “Didn’t I” drifts into earshot, laden with regret over a failed relationship. It became Darondo’s most covered song and the track that appeared most often in other media: the TV shows Breaking Bad, High Fidelity, The Blacklist, and The Deuce, among others. Pure seduction in song. The disc’s other ballads are silk-sheet nice, as well. “I Want Your Love So Bad” offers midtempo, honeyed yearning for a woman’s heart. Darondo brings more Green-like falsetto testifying and romantic showboating and the keyboard solo is a crystalline, serpentine spine-tingler. Yet more Green-like shivers ensue with “Sure Know How To Love Me”; those emphatic Hi Records rimshots that make you feel 73% slicker than you actually are buttress a languorous soul heart-melter that’s smooth, luxurious, yet not at all oleaginous. (Here would be a good time to praise Al Tanner’s production and Eddie Foster’s guitar work. Also, the comp’s last three tracks are enhanced by San Francisco musician Bing Ji Ling. Unfortunately, I could find no other credits.)

But as sweet as those mellow panty-droppers are, Let My People Go really thrives on its funkier cuts, such as “My Momma And My Poppa,” a paean to Darondo’s parents that will make you want to add another member to your family, if you catch my drift, and “True,” whose spare, methodical funk with sample-worthy beats is the closest D comes to the mighty Meters.

Darondo didn’t record much, but the nine songs he left have incredible staying power. Luv N’ Haight reissued Let My People Go on vinyl in 2018, but it’s already scarce and pricey. Perhaps another re-release is in order. -Buckley Mayfield