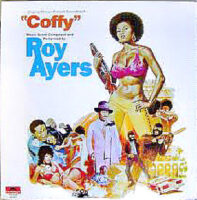 Blaxploitation flicks flourished briefly and brightly in the ’70s, but most have been forgotten, except by fanatical film scholars and heady hip-hop producers. But the soundtracks that accompanied them have had a much longer shelf life in the public’s consciousness. Thankfully, the guardians of these gritty and flamboyant urban cinemascapes have kept awareness and availability alive all these decades later, and heads are consequently richer for having easy access to classics of the genre such as Curtis Mayfield’s Super Fly, Isaac Hayes’ Shaft, James Brown’s Black Caesar, Marvin Gaye’s Trouble Man, and Earth, Wind & Fire’s Sweet Sweetback’s Baad Asssss Song. Along with these monuments to long-sideburned coolness, Roy Ayers’ Coffy belongs snugly in the top 10.

Of course, Ayers had established himself as a jazz-funk catalyst previous to this swanky soundtrack, and consequently his catalog has become one of the most fertile plundering grounds for hip-hop producers. In Ayers’ canon, Coffy is one of the richest source for said samples. I haven’t seen the movie, in which a nurse tries to get justice and revenge against the drug dealers responsible for misleading her 11-year old sister to drug addiction, but no matter. Ayers and his crack team of musicians have forged a treasure trove of action-packed jams that slap, from penthouse to pavement.

On “King George,” Ayers places his stage-whispered chat about the titular pimp over a lubricious, methodical rhythm that evokes War’s “Slippin’ Into Darkness.” If you’re gonna evoke, evoke the best, right? “Aragon” is as super-fly as Mayfield’s “Super Fly,” but soul-jazzier; Roy and comrades pack so much coolness, tension, and action into 2 minutes 52 seconds. “ King’s Last Ride” is as flashy and funky as a pimp’s wardrobe, but it’s a tease at 65 seconds. On “Brawling Broads” (oh those wacky ’70s), Richard Davis’ strutting bass line and Dennis Davis’ in the pocket slaps undergird Ayers’ delicately spine-tingling vibes motif. “Escape” brings white-knuckled suspense funk with rapid bongos/congas, trombone, and trumpet. Co-written by orchestrator/keyboardist Harry Whitaker, “Exotic Dance” is the classiest strip-club jam you’ll ever hear. Whitaker’s electric piano is a soulful swirl that would fog up Ramsey Lewis’ spectacles. Ayers leaves the two strangest tracks for last, with “Vittroni’s Theme” and “End Of Sugarman,” recalling Roy Budd and Gruppo di Improvvisazione Nuova Consonanza, respectively. Respect!