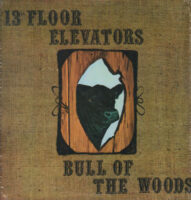 The production’s flawed, Roky Erickson only appears on four of the album’s 11 songs, the band members sound world-weary, and Tommy Hall’s jug mostly has gone AWOL. Yet Bull Of The Woods—which was recorded in 1968 when the 13th Floor Elevators were disintegrating and Roky was diagnosed with paranoid schizophrenia and experiencing the torments of electroconvulsive therapy at a Houston psychiatric hospital—is fantastic. As much as I love the foundational psych-rock documents The Psychedelic Sounds Of… and Easter Everywhere, I often feel that Bull is my favorite work by these Texan psych-rock icons. And that’s a testament to the songwriting and guitar-playing chops of Stacy Sutherland, who forever has remained in Roky’s shadow—unjustly so! Listening to Bull might be akin to hearing a mythical Velvet Underground record on which Sterling Morrison somehow grabbed the reins from Lou Reed and revealed his hidden genius.

Now, as a vocalist, Sutherland’s the polar opposite of Roky: drawling, understated, uncharismatic. No matter. Stacy can write fascinating, multi-part songs and play a mean guitar; his is a glinting, choppy style with implied funkiness. You can hear that right away on the Roky-sung opening track “Livin’ On.” It choogles into earshot like CCR on downers or JJ Cale with a brawnier backing band, with Sutherland’s guitar clanging slyly at oblique angles above the laid-back groove. “Barnyard Blues” is Sutherland channeling Dr. John’s casually funky, swampy rhythm sorcery, powered by Ronnie Leatherman’s stalking, fathoms-deep bass line and Danny Thomas’ in-the-pocket drumming.

“Till Then”—co-written by Sutherland and Hall, with the former singing—is a paragon of beautiful, breezy rock, swathed in consoling “la la la”s. The song suavely bewitches until a mini rave-up raises the roof—the first of many such moves that distinguish Sutherland and Hall’s uncanny penchant for breathtaking dynamics. For those missing the more aggressive feel of Easter Everywhere, Roky and Hall’s “Never Another” will fill the void, although Hall’s electrified-jug bloops are mixed way down low. Thomas’ horn arrangements sound as if they were dropped in from a Herb Alpert session, but their incongruity charms, against the odds. Sutherland achieves some kind of peak with “Rose And The Thorn.” A sublime, existential slice of psychedelia that ebbs and flows with unpredictable fluidity, it’s like four great songs stitched together by a masterly editor, lifting you higher with every savvy swerve. “Down By The River” is not a Neil Young cover, but rather a Stones-like rocker with understated swagger in its groove and deceptively stinging guitar shafts that foreshadow the great ’90s trashadelic group Royal Trux.

With Sutherland’s “Scarlet And Gold,” the bass and drums achieve serious dub motion and pressure while Stacy sings with mellow gravitas, his earnest voice halo’d by gorgeous backing “oh”s. The song boasts another thrilling dynamic shift that launches the song into a higher stratum of psychedelic splendor, as Sutherland again proves himself the master of this strategy. “Street Song” sounds like a more lysergic take on the Stooges “Little Doll” template. This is tectonic-plate-shuddering rock augmented by some astonishing proto-dub churn, streaked with pitiless guitar pyrotechnics. Monumental metamorphoses occur, each surprising change elevating you to a higher state of consciousness. Fucking genius.

But this isn’t even Bull‘s peak. That would be “Dr. Doom,” on which Roky and Stacy sing in splendid unison. Of all the phenomenal songs in the Elevators’ canon, this one hits hardest and deepest for me. It’s sacred music distilled into three minutes of spiritual psych-pop, and its almost comical horn overdubs somehow enable it to soar even higher. The lyrics are mystical poetry sung with so much sincerity, you swallow them whole and feel enlarged for doing so. In this way, the song’s like the Beach Boys’ greatest tune, “Feel Flows.” Dig this heavy handful:

(chorus) Beginning no end, alpha no omega
Two mouths one voice still appears
(verse) We won’t join in sameness, we are each one different
We won’t join in oneness when we’re each one whole
We’ll be like in feeling, being of the spirit
Housed in body crystals, ever always soul
We’ll be right beside him, all we’ve been is beauty
All will be in union, from our life unfolds

From this summit, Bull gently descends back to earth. Bass boss Leatherman comes through with “With You,” a sweet waltz-time swooner with bliss-inducing vocal arrangements. In retrospect, maybe the Elevators should’ve given Ronnie more chances to write. And ol’ Roky delivers an ideal album-closer with “May The Circle Remain Unbroken,” an eerie, sparse ballad that sounds as if Erickson is evaporating before our ears, hymning his demise with an angelic hush, as we, with perfect hindsight, see the circle breaking brutally.

I’ve listened to Bull Of The Woods at least 100 times in my life and have found it to be the rare album that never loses an iota of its luster. Make no mistake: The Elevators got stuck at the top floor. -Buckley Mayfield