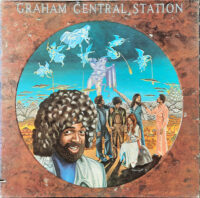 Graham Central Station’s third album is as uneven as Sly Stone’s concert attendance record, but when it’s on, it is ON. Sly’s former bassist, Mr. Larry Graham, helms this party album/Christianity recruiting ad with high(er)-powered, low-frequency authority. For Christ’s sake, Graham slapped a verse from I Corinthians 15:51, 52 on the album’s back cover and had the band dress in white robes while looking at what appears to be a Mark Rothko painting. Worship the color field, y’all!

Now, I harbor serious skepticism toward piety of any stripe. But I’m willing to set all that aside to hear old thunder thumbs do his fonky thing on the four-string. One does wonder how such a hardcore Christer could produce such filthy tones and orgiastic bass lines, but, as the cliché goes, Goddess works in mysterious ways.

You may feel as if your favorite deity blessed you as Ain’t No ‘Bout-A-Doubt It‘s first track, “The Jam,” which is not only the zenith of Graham Central Station’s discography, it’s one of the greatest opening album tracks ever. It’s as if Graham took the funk lightning he gleaned during his time with Sly & The Family Stone, added thunder, and then threw in a tornado for the sheer hell of it. There’s enough strutting bravura and explicit lasciviousness in its eight minutes to fuel a stadium-sized bacchanal. Robert Sam’s keyboard swirls, whorls, and catcalls should be sanctioned by the FDA; Graham’s bass growls and grunts are rated XXX, Manuel “The Deacon” Kellough’s drumming is in the key of F(UCK). This bomb is followed by “Your Love,” GCS’s biggest hit (#38), but it sounds like a bloated dud to your critic. It’s a mid-’70s update on romantic soul balladry with falsetto vocals, churchy organ vamps, Billy Preston-esque clavinet warbles. Unfortunately, the syrupy emotion’s ladled very thickly onto an inane foundation.

Thankfully, the remaining three songs on side 1 redeem that misstep. The brisk, bubbling funk workout It’s Alright” is a paean to music’s power featuring Graham’s immortal line, “Dancin’ and sangin’ is all I really ever wanted to do.” David Dynamite’s guitar pays homage to James Brown’s “Sex Machine” riff while Hershall Happiness’ clavinet blurts immeasurably funkify the party and Graham’s bass solo is as repetitive as Holger Czukay’s in Can’s “Yoo Doo Right”—a great thing. GCS high-step into the end zone and spike the football right through to the earth’s core. On “I Can’t Stand The Rain,” GCS adorn Ann Peebles’ classic 1973 Memphis soul lament with a robust vocal arrangement led by Chocolate’s alpha-female belting and a stomping rhythm that’s the polar opposite of the original’s spare framework. A bulbous rager geared to optimize the pleasure principle, “It Ain’t Nothing But A Warner Bros. Party” surely had a young Prince taking notes to this unstoppable groove organism. It’s yet more proof that GCS are maximalists who strive to overwhelm your senses and stoke your libido to the boiling point, with an evangelical fervor.

The less said about side 2’s showbiz-y schmaltz, gospel-inflected R&B boilerplate, and cloying MOR soul with cult-y, pro-Christianity vibes the better. However, “Water” boasts a methodical, libidinous funk in the rich vein of Sly’s “Thank You (Falettinme Be Mice Elf Agin).” The groove’s so damn filthy, you’ll forgive Graham’s heavy-handed xian propaganda (“Seeking first GOD’s Kingdom/For sure’s the only way/SATAN’s out to get you/And that’s without a doubt”). Sure, Lar, whatever you say.

Like most Graham Central Station albums, Ain’t No ‘Bout-A-Doubt It can be found for low prices in used-vinyl bins. When the band’s firing at peak capacity, they make you feel as if your entire body is a G spot. -Buckley Mayfield