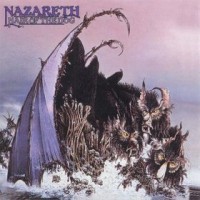 In 1975 the Scottish Hard Rock band Nazareth released their masterpiece, and what is one of the greatest Hard Rock albums ever recorded, Hair Of The Dog. This album is simply amazing from first to last and doesn’t have anything resembling a weak song on it. What it does have is one hard hitting earth shaking song right after another. And they are all perfectly balanced by Danny McCafferty menacing, growly Vocals and Manny Charlton snarling searing Guitars.

This album stands tall as one of the greatest Hard Rock icon albums of the 1970’s and of all time. –Karl 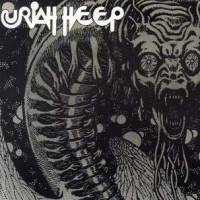 Any time the infamous, heavy-hatin’ thought police at Rolling Stone review an album saying “if this group makes it I’ll have to commit suicide,” you know you’re on to something good, and Uriah Heep’s debut remains a cornerstone of vintage hard rock, delivering a crushing assault that belies its 1970 release date. The bloodthirsty “Gypsy” sets things up with some burning guitar/organ interplay before diving into a Paleolithic riff over which Byron soars with layered vocals. It’s those wild, dramatic harmonies and the band’s authoritative thud that stamps these tunes as something uniquely intense and remarkable – Heep ain’t just the poor man’s Purple, folks! Check out the wild “Bird of Prey,” which predicts Queen with it’s jarring vocals (and kudos to whover swapped this in for the useless “Lucy Blues” from the UK issue), heavy boogie beast “Real Turned On,” and churning entries like “Walking in Your Shadow” and “I’ll Keep on Trying.” The melancholy ballad “Come Away Melinda,” and more involved concept pieces “Dreammare” and “Wake Up” are cool diversions from the mayhem, the band stretching out without losing the plot. Factor in a spacious, detailed production that places you right in the crossfire, and you can hear the metal being forged right inside your aching skull. —Ben 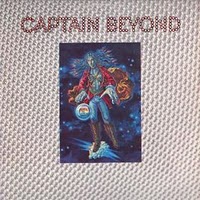 Psychedelic rock emerging from its Technicolor cocoon as a decidedly more metallic butterfly. This is one of the first metal albums and still one of the best. It runs through a quick half hour of seriously kick-ass riffs and tricky rhythms that would suffice to leave some of us sufficiently breathless were it not also for the stoner imagery and a general atmosphere of stoopid awesomeness that I find transporting—despite myself. Sure, it gets overly dopey towards the end, but most of its listeners are doped up by that point, anyway. Guitar, bass, and drums manna for those of us who like that sort of thing. As for the rest of you… well, who asked you, anyway? Highly recommended late-night listening. –Ben 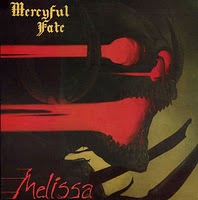 Melissa unleashed the dark majesty of Mercyful Fate on welcoming hordes of eager metalheads ready to set sail on a lake of fire, the band picking up where Priest left off with their late 70’s platters of pain and injecting an elevated sophistication and malevolence embodied in the angelic blasphemor wails of King Diamond. While the edge of Melissa’s sacrifical blade is slightly dulled by the tangled fortress “Satan’s Fall” on side two, the purity of purpose in classics like “Evil,” grave robbing “Curse of the Pharaohs,” and the pummeling “Black Funeral” let loose such torrents of spectral ferocity and hell-spawned riffage that Melissa stands as an all-consuming plethora of wicked delights. –Ben 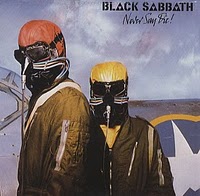 This was a pleasant surprise because I’d heard so many bad things about this album both from critics and the band themselves. Stories of being too drugged up to continue in the studio don’t seem to gel with the final product, which sounds crisp and well mixed to me, the spectacular drumming up front and Ozzy’s vocals not sounding in the least druggy. I guess there’s a lot to be said about post production. But the songs to me sound better and more musically adventurous than those on Sabotage or even the Dio era albums that followed. Particular highlights are the psychy, wah wah feel of Junior’s Eyes and Iommi’s riffage on Shock Wave. All in all, I really don’t think it was a bad album for Ozzy to bow out on. –Neal 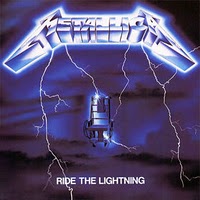 Like everyone else my age, The Black Album was the introduction into metal and the undeniable force known as, Metallica. So, obviously I had to do a bit of working backwards to familiarize myself with their other (heavier) albums. I came to enjoy all of their 80’s material, but Ride the Lightning struck me the hardest with its tremendous sound that was brought to the forefront by James Hetfield’s growling voice, Lars Ulrich’s powerful drumming, Kirk Hammett’s severely commanding guitar playing, and Cliff Burton’s intense bass. Each member proved to be pivotal to the genius sound they created on this record and while, Master of Puppets usually gets all the accolades for being their finest, I still come back to this one much more and truly feel that it’s by far the greatest thrash metal album of all-time. –Jason 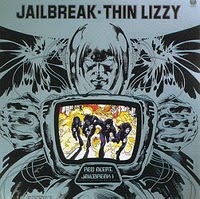 Containing the only two Thin Lizzy tracks you’re ever likely to hear on the restricted playlists of classic rock radio in the US, with the barroom nostalgia of “The Boys Are Back in Town” and tight-fisted title track, Jailbreak has become the most recognized release of the band’s existence. In many ways, the album simply carries on from Fighting in it’s mix of classic Lizzy rockers featuring generous amounts of their signature dual guitar sound, and an abundance of mellower songs highlighting Lynott’s penchant for romantic lyricism. The heavier tracks are some of the band’s best yet, with the bold “Warriors” and battlefield tale “Emerald,” but the band turns in some stellar easygoing entries like the wistful “Cowboy Song,” catchy “Running Back,” and broken-hearted “Romeo and the Lonely Girl.” Throughout, Lynott’s expressive vocals and the band’s high-caliber musicianship add an earnestness to the material, without sacrificing the power at the band’s core. –Ben 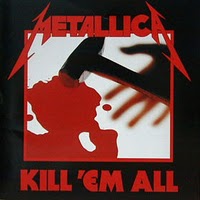 The blood soaked hammer that adorns Metallica’s debut serves as an ample warning to those who would drop the needle on this violent platter, as the Bay Area ‘bangers cut loose throughout Kill ’em All, barking with fury as every track is sent into the red with unrestrained aggression. This is the sound of metal-obsessed fans stripping away the fat and then dishing out the lean leftovers with a new, ultra-heavy direction, Kill ’em All serving as a statement of dedication to the denim ‘n’ leather lifestyle, alone in service to the almighty riff. Adrenaline pumping rallying cries to the metal masses like “Whiplash,” “Hit the Lights,” and “Motorbreath” are delivered at breakneck speed, while Metallica rides crushing grooves on tunes like “The Four Horsemen” and “Seek and Destroy.” Although the band pushes the sound of their NWoBHM influences to it’s extreme, the fact that they have the skill and smarts to adopt the catchiness that ran through those imported sides is one of the key factors that elevates Kill ’em All to it’s lofty position. –Ben 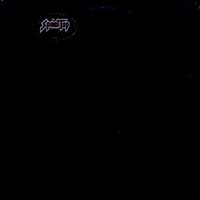 The soundtrack to Spinal Tap’s cult rockumentary serves as the only easy place to hear highlights from long out of print, impossible to find albums like Brainhammer, Shark Sandwich, and Bent For The Rent, with classics like the onstage anthem “Tonight I’m Gonna Rock You,” the squalid “Hell Hole,” and sexual throb of “Big Bottom” and #5 Japanese hit “Sex Farm” leading the charge. Tap’s regrettable flirtations with progressive rock are represented by “Stonehenge,” and the ill-timed ’77 release “Rock And Roll Creation,” the album also featuring the previously unreleased Tufnel composition, “America,” and both sides of the band’s pre-Tap Thamesmen 7-inch, “Gimmie Some Money/Cups and Cakes,” both fine examples of the so called “Squatneybeat” sound that gripped the UK for 3 days in 1965. Until the long promised Tap reissues arrive (“A lot of our music they won’t put out on CD because it’s too vibrant.” – David St. Hubbins), This Is Spinal Tap is your best bet for a taste of the Tap. –Ben 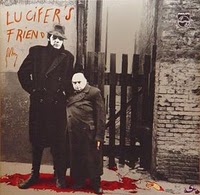 This German hard rock machine, with British belter John Lawton, (later of Uriah Heep) gave birth to one of the best heavy rock albums of the early 70’s. From the screaming vocals of “Ride In The Sky” (with its brass opening reminiscent of Zeppelin’s “The Immigrant Song” and an almost “thrash metal” riff) to the progressive/hard R&B of “Toxic Shadows”, to the lumbering, Sabbathish doom of “Keep Goin”, this album never lets up for a second. Fans of Black Sabbath, Uriah Heep, Deep Purple and Led Zeppelin must have this in their collection! Lawton is one of the best singers in hard rock, and the musicianship of the group is tremendous. Very heavy indeed for a 1971 release. The bonus tracks show the more mainstream, rock ‘n’ rollin’ side of the band, but the instrumentals “Horla” and “Satyr’s Dance” (taken from B-sides) really cook. Do yourself a large favor and check this one out. —Chris 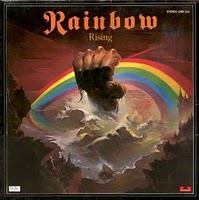 As a blossoming Deep Purple fan ‘Rising’ was my introduction to Ritchie Blackmore’s post-Purple work and although I was initially ambivalent about the sound and Dio’s voice I’ve since come to love this music which, has also helped me appreciate Dio’s stint with Black Sabbath a lot more. After a debut album that fiddled with some of Ritchie Blackmore’s ideas, ‘Rising’ sounds more like a band effort and everything about the sound has got heavier. Dio’s lyrics took me a while to get used to but they sound tailor-made for this kind of dramatic heavy rock and his voice is so good it doesn’t matter matter what is said. The first side of ‘Rising’ is made up of short, punchy heavy rock songs with “Do You Close Your Eyes” being the album’s weakest track and a mood lightener before the album’s two big statements, “Stargazer and “A Light In The Black”. “Stargazer” is a huge undertaking that demands nothing but the best from the people involved. The heavy drone is sustained for eight and a half minutes and Dio’s range is tested in trying to match the constant thunder of the music. “A Light In The Black” is my personal favorite moment of the album, proving that this line-up could rock as hard as anybody. Cozy Powell drives the song along, allowing Dio to swoop and fly vocally, and Tony Carey takes on Ritchie Blackmore in a furious solo battle that brings out the best from both. The album’s a bit short and there isn’t a huge amount of variation but ‘Rising’ contains six good tracks and at least two essentials. –Tom 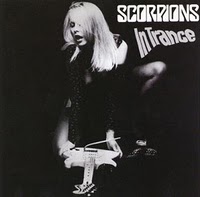 Three albums in and Scorpions are settling into an eccentric, decidedly European mix of piercing Teutonic fury and abject gothic balladry that would hallmark future Uli-era triumphs Virgin Killer and Taken by Force. In Trance features only a handful of hard rockers, but the manic, psyche-searing opener “Dark Lady” (featuring oddly appropriate lead vocals by Roth), tightly-clenched stomp of “Top of the Bill,” and weird, lost in translation “Robot Man” are all stinging entries, while “Longing for Fire” stands out as an unusual, brightly melodic moment. But it’s those troubled, moonlit strolls into balladry that really define the dark undercurrent of In Trance, with the mesmerizing title track, black veiled “Living and Dying,” and thunderous declarations “Evening Wind” and “Life’s Like a River” cementing the album under waves of isolation and melancholia. Only the lumbering blues “Sun in my Hand” hints at a loss of plot, one of Roth’s weirder Hendrix tributes that’s at least partially redeemed in his floating, Floydian instrumental “Night Lights” that closes the album. –Ben