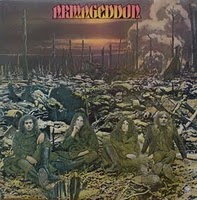 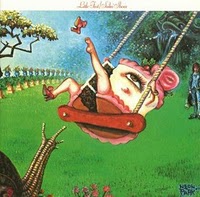 This wonderfully bizarre album cover hides the secret love child of ZZ Top’s “Tres Hombres” and The Stone’s “Exile on Main Street.” “Sailing Shoes” is an eclectic mix of rock, country, blues and gospel that avoids the Southern and country-rock cliches and is experimental enough to reward repeated listening. In the past, when I’ve thrown on The Allman Brothers or Dr. John, I’ve been disappointed because THIS was the album I wanted to hear all along! It’s a rare album that transcends genres and consistently surpasses expectations but Little Feat has done it here. If you love seventies rock slip on “Sailing Shoes,” walk over to Jive Time and thank me! (And then pick up the equally impressive “Dixie Chicken.”) –David 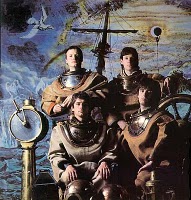 By 1980’s “Black Sea” XTC were fully into their stride, the previous years exceptional “Drums And Wires” remains an early high water mark yet “Black Sea” sees them expanding their sound further, moving away from the angular, sparky new wave of that album and towards a tougher, rockier sound, as such it’s arguably their most accessible of all their early albums. A 60’s feel is beginning to rear it’s head in a lot of their work, take for instance “Respectable Street” and “Towers Of London,” the former has strong echoes of mid 60’s Kinks whilst the latter is pure “Rubber Soul” era Beatles, both given a punkish twist, “No Language In Our Lungs” also has a strong Beatles influence but still manages to sound typically XTC. Where “Drums And Wires” was rough around the edges “Black Sea” is a lot more focused and less artsy sounding, still this is XTC so fans of their artsy leanings can always revel in “Travels In Nihilon’s” apocalyptic soundscape or “Living Through Another Cuba’s” dub infused paranoia but overall Black Sea is a lot more polished and poppy than anything the band had recorded since their spiky, charming debut. “Generals And Majors,” “Love At First Sight,” “Rocket From A Bottle,” “Paper And Iron” and “Burning With Optimism’s Flames” would all have made great singles, strange then that they chose to release arguably the album’s weakest track, the XTC by numbers of “Sgt Rock,” still it’s one misstep on an otherwise blemish free album, I prefer the jittery, nervous “Drums And Wires” ever so slightly but that does not diminish “Black Sea’s” tough majesty. Yet another classic from England’s most underrated band. –Derek 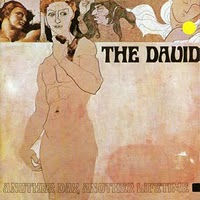 The David didn’t really blaze any new “freak” avenues, but they have songs falling nicely beyond the mid-60’s three chord thump-mmmm-bump. I guess they sound like a better Stateside garage band who took steps into the “psychedelic” while retaining “garage” energy, and staying smartly this side of “hippie.” It paid off for them at the time… they got some airplay, even charted locally, but too bad it wasn’t enough for the squares to remember them. This has become a hard-to-find record, but when and if you can snatch it! –Nipper 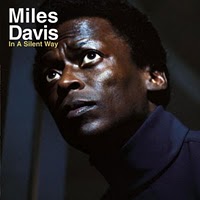 As a teen, I fancied myself a jazz drummer, and listened to plenty of complicated-for-complicated’s sake drummers, thinking that if I could figure out how to cram eleven notes into a three note space, I’d have it all figured out. And then I discovered “In A Silent Way”, and my mind was sufficiently blown. “Shhh/Peaceful” is entirely 16th notes on the hi-hat (and nothing more) and a two note mantra on the bass, while the best collection of instrumentalists available (Hancock, Corea, Shorter, McLaughlin, Zawinul) vamp over the top. Miles himself is restrained, compared to his other recordings of this period, giving the album a late night, quiet vibe. The best elements from these extensive sessions were spliced together from tape by Teo Macero to create two massive songs, in what could be argued as an early form of remixing. Simplicity. It’s an underrated thing, especially in jazz. –Cameron 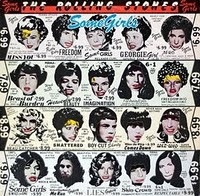 When I was in school the rules were clear: Rock ruled. Disco and punk sucked. The end. As a devoted rocker I carried my KISW “Disco Sucks” club card in my wallet and expressed disgust whenever Donna Summer or the Sex Pistols were mentioned (having never actually heard either). Then something miraculous happened: The Rolling Stones released “Some Girls.” The Stones’ ability to blend rock, blues and country with the seemingly polarizing disco and punk made me realize for the first time that it was all related and that it was all rock and roll! Pre-internet, this album was also my portal to a world outside of the suburbs of Seattle. I’ll never forget the first time I heard the sleazy “Shattered,” and prowling “Miss You” on the radio, flooding me with images of a gritty, decadent New York. The sexually charged lyrics, androgynous imagery and Jagger’s swagger (along with the infamous SNL appearance promoting the album) suggested a sexual world infinitely more complex and exciting than the black and white one previously painted for me by the likes of Kiss and Aerosmith. Even the Warhol-esque, die-cut cover’s tabloid kitsch influenced the way I thought about art and design. Best of all, “Some Girls” sounds as fresh to me today as it did in ’78 and continues to hold a coveted top spot in my record collection. Some Girls. Some album! –David 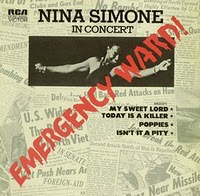 I was a bit reluctant with this at first, mainly because this album is like 80% George Harrison, but GH was the true talent of the Beatles, so I guess if you’re gonna cover songs of one of the fab four, his make the most sense. God forbid she chose Ringo…. Somehow, I feel a 20 minute version of “Octopus’s Garden” wouldn’t hold the same potency as the belting gospel driven take on “My Sweet Lord”. For me though, it’s her take on “Isn’t It a Pity” that does it for me. This song is Nina Simone at the absolute height of her soul powers. Beautiful subtle vamping, super subtle bass for the melody to glide along, and her sublime warm and heartfelt, half spoken, half sung vocals. You really won’t find many tunes that melt the heart like her take on this one. –Ben 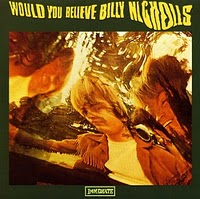 “Would You Believe” is stunning late ’60’s pop crafted with knowing nods of love to Brian Wilson’s Pet Sounds, that thankfully NEVER forgets the importance of the… (cough) London Social Degree. However, if drug references are Billy’s point, they’re overwhelmed soniclly as “Would You…” is packed full of LUSH, dense arrangements awash with a “sound” that serves to unify the LP as a whole… it’s absolutely gorgeous. In fact… I own two copies (I wish!). Anyways, turns out, thirty years ago, this LP was shelved without any believable reason, the Loog, the fella responsible for the shelving, oughta be ashamed. –Nipper

The second collaboration between the two highbrow British art/prog rockers, Evening Star pairs Fripp’s “Frippertronic” guitar, layered and sustained indefinitely through use of analog tape loops, with synthesizer and various treatments from Eno, for an ambient match made in heaven. The serene first side is highlighted by the beautiful title track, which borders on melodic, while still maintaining the minimalist style of Eno’s ambient works. Conversely, the second side, titled “An Index of Metals,” quietly builds layers of ever more dissonant guitar, developing an unnerving atmosphere. This is an album that effortlessly creates a distinctly reflective mood, and is an essential item for fans of either artist. –Ben 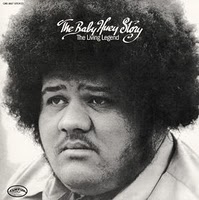 The posthumously released “The Living Legend” is solid, melodic, slightly psychedelic, catchy funk from top to bottom. In fact, it rocks surprisingly hard, with more than a little Sly Stone influence. Curtis Mayfield gets the production credit here, and this has got to be the most rocking thing he was ever involved in. Now, Baby Huey is no great singer, but he is “400 pounds of soul.” What he lacks in technical ability, he more than makes up for in delivery and personality. His sermon during “A Change is Going to Come” doesn’t make a hell of a lot of sense, but it sure sounds good. Ditto for his ramblings on Mayfield’s “Mighty Mighty,” which didn’t fair too well on the singles charts, but may be one of the most chaotic, fun sounding recordings ever released as such – sorta like the Beach Boys “Barbara Ann” on acid. It, along with the rest of the album, really give you the sense that these guys must have been a ton of fun (literally) in concert. The standout tracks are most likely “Hard Times,” with its instantly recognizable, oft-sampled intro; and “Running,” which could be the most exciting, hardest rocking track on the whole album. –DL 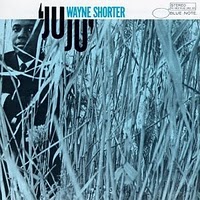 Modal jazz meets brilliant songwriting on this unbelievably strong effort from a young Wayne Shorter. Abstract at first, but completely catchy and whistleable after a listen or two, there’s just a sort of magic that happens when you combine this blend of otherworldly experimentation and clever, nearly pop blues-based hooks. Songs like “Deluge” and “Mahjong” play around with a theme just long enough to make you forget it, and then bring it back like a chorus. “Twelve More Bars To Go” is bright and airy blues in a familiar format, but the interplay and abstraction allow the soloists to wander away from the structure, to test the waters, and then return comfortably. Shorter’s tone is fantastic, his lines are lyrical, he along with the band creates a light and spacious mood that is bluesy, relaxed and on occasion serious, but is always engaging. The back-and-forth between he and McCoy Tyner is sublime, and the tempos are bouncy and spry without being pushy or demanding. Drummer Elvin Jones is at the top of his game, really showing some amazing soft-handed speed on the title track. All in all, a perfect post-bop record. –Cameron 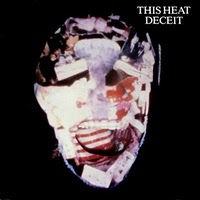 Stimulus and response. Art rock on the far side of punk, this is as nervously exposed and at least as aggressive as the latter, while being as meticulously constructed and self-reflective as the former. The essential difference is in the aesthetic commitment. They rehearsed and composed in a meat locker, and being committed to their conceptions, they recorded their records there too. The paradox of making such vital music in such a moribund space comes to a strangely logical fulfillment by being this album’s greatest sonic virtue: its shock and awe dynamics forego the simple attack of a studio-made record which would appeal to more ears and be both more prog and more punk. This is rock as art and thus no audience. Too bad we choose categories over impulses. On the other hand, they’re now gaining ground, and, unfortunately, wider influence. Commodification is coming. Enjoy the impact of this record while it lasts.

History repeats itself. But good music never does. This is the best-kept secret in rock music. So essential, this review ain’t worth the bytes it’s made of. Just get it already. (No, don’t!) –Will