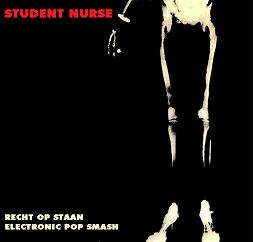 By the early 1980s Student Nurse was a mainstay of the alternative Seattle music scene.  Their angular. slightly dissonant and dance-driven sound set them apart from the darker, punkier and heavier bands they shared bills with.  Bands like Audio Leter, The Fags, Red Dress, and The Refuzors.  Like the best of their contemporaries they honed-in on their particular, unique sound and the band expanded outward, sending them on a trajectory somewhere between subversion and art-damage.

Student Nurse started as the brainchild of married couple John Rogers (drums) Helena Rogers (guitar and vocals) along with bassist Joe Harris and rhythm guitarist Al Davis.  In 1979 the band self-released their first single, (“Disco Dog b/w Lies).  The songs stood perilously between weirdness and pop-exactly as the band had anticipated.  One other song from this line-up was included on the ground-breaking “Seattle Syndrome” compilation released on Engram Records in 1981. By that time Harris and Davis had left the band and the jittery guitar leads of Helena Rogers were accompanied by new members guitarist Tom Boetcher and bassist Eric Muhs.  Helena’s vocals were disjointed, pointalist and determined. John’s jazz-influenced drumming and rhythms were the perfect foil to the rest of the band which left the impression the music had fallen on it’s face-in the best possible way.

Their next vinyl outing was the one-sided 12″ “As Seen On TV” with individually hand-screened artwork by Helena on the cover-as had been the case with the first single.  This is the kind of stuff collectors drool over nowadays, but Helena and the rest of the band weren’t interested in collectors of the growing market for oddball packaging that would later cater to a pre-manufactured market for Seattle music, and the rest of the alternative/independent scene.  For Student Nurse it was all about the aesthetics and ethics they held.

In 1981 Student Nurse entered Triangle Studios-later to become the famed “Reciprocal Recording” where so many other successful bands would record.  The choice of the material for their next single  may have seemed odd, as they chose two of their more accessible songs, the Dutch-lyriced “Recht Op Staan” (“Stand Up Straight” in English-a song referring to the importance of good posture).  The B-side was an instrumental called “Electronic Pop Smash”.  Both choices were designed to catch listeners and fans off-guard.  Maire Masco, one of the heads of Pravda, the label that released “Recht Op Staan” remarked “Who the hell sings a rock song in Dutch?  Not even the Dutch!”  And that was exactly the subversive kind of thing that could have been expected of Student Nurse.

David Javelosa (of “Los Microwaves” and” Baby Buddha”) was brought in to produce-another purposeful anomaly since Student Nurse were ostensibly a guitar-driven band while Javelosa was known more for his work in synthesizer-based outfits.  The fascination of weirdo-influenced pop made it a good fit for the band and Javelosa.  A totally unexpected lyric sung in an almost-obscure language backed with a song who’s title denoted electronic synth sound (yet contained no synthesizers) was not only an inside joke.  It was a decision to thumb the nose at everything American alternative music was becoming.  Over three decades later it’s easier to see this was an “inside job” calculated to challenge listeners and their perceptions.

Although it was clear John and Helena were the core of the band, it remained fairly democratic, but onstage Student Nurse belonged to Helena.  Skinny with piercing silver eyes and a Phranc-ish hair she was the epitome of lesbian-chic before lesbian-chic was even a thing.  All shouts and smiles, she provided the hyper-caffeinated energy at the center of the band.  The staccato performances combined with Helena’s butch persona scared many of the top booking agents from putting them on the bill with larger touring acts.  The band was too oddball and too difficult to pigeonhole…in fact they might even upset the sensibilities of a MOR audience.  But a few clubs regularly welcomed them, and the band was expert at putting together shows with other “unbookable” acts at private venues, lodges, halls and dance studios.  They did quite well without having to assuage the mass crowds and bookers that were starting to catch onto the poppier side of new wave.  Student Nurse didn’t spend time calculating what would have been best for their career-they simply did what they loved for as long as people wanted to hear them.  They were far more interested in being architects of their own very unique sound and approach to the art and dance.