LOCK YOU UP
THE FAGS 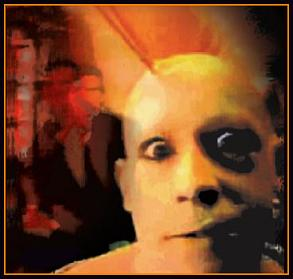 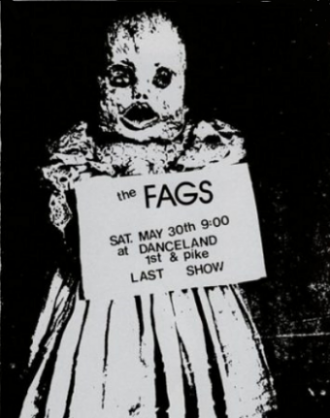 The Fags might be the most fun Seattle bands to play ‘six degrees of separation’ with…except you’d only have to play with one or two degrees. Direct ties lead everywhere from 70’s Omni-sexual performers Ze Whiz Kidz, to neo-hippies Sky Cries Mary; from The Lewd to showgirl Julie Miller and The Casino de Monte Carlo and from John Holbrook, Bearsville engineer/designer and the man who mastered classic albums like ‘Tommy’ and Hendrix’s ‘Axis: Bold as Love, to Gordon Raphael-producer of The Strokes and Regina Spektor among others. From the skillfully written and recorded duo Such to the grimy recording of ‘Raping Dead Nuns by the band Solger, Seattle’s first hard-core band…and those connections barely scratch the surface.

The band rose out of a loose-knit community of musician-friends and punks that came and left Seattle’s infamous Fag House during the 1980’s.  Before that many had been friends living off a sugar-daddy Charles Upchuck Gerra while he performed in his first band, Clone.  In 1980 former drummer for the glamorous Julie Miller wunderkid drummer Ben Ireland,  his filmmaking, multi-talented sister, Barbara Ireland.  legendary guitarist Paul Solger (taking the name of his band) joined with  poet/painter Dahny Reed to work as a unit.  The band would be dubbed “The Fags” by local promoter Steve Pritchard when the band went onstatge one night at the Lincoln Arts Center.  Pritchard did not know the name the band had planned to perform under that night-and neither did the band, apparently.  So in announcing them Pritchard simply walked onstage and yelled out “Ladies and Gentlemen-The FAGS!  The name stuck and together they created some of the most outrageous stage performances ever seen in Seattle….and later in downtown New York where the band re-located in the mid 1980’s.  During the time that Barb Ireland spent at NYU’s film school the band’s bass was held on by Jane Playtex-then the wife of Steve Hoffman of one of the most hardcore bands of the day, The Fartz.

Studio recordings of the band are rare, but The Fags were good at getting friends to catch video and audio of many of their performances.  Most were done on the fly and not up to the standard we are used to in the digital age…but they are certainly well-loved documents made by devoted fans and co-conspirators.  Of their recorded output the song Lock You Up (recorded in NYC) might be the most accurate summation of the band’s approach.  One of their signature songs The Rosary is an updated version of a classic Fags tune, recorded in Seattle’s Scumbag Studios in 2008.  The recording includes “the ghost” of Upchuck on vocals taken from a crusty NYC 4-track recording made in 2008.  The “ghost” vocals were used because Upchuck had died in 1990 of complications of AIDS.

The band had moved to NYC in 1984 where they quickly gained a notorious reputation that included wild stage shows with vampire weddings and full body day-glo tattoos. Spending time with ’80s icons such as the New York Dolls, Andy Warhol, and the Ramones, they found their niche in the East Village music and arts scene, eventually recording with producer Yoram Vazan.

The Fags sojourn in NYC in 1983-1984 had made a splash and the band members become friends with major players in the music scene.  In order to pursue these contacts Upchuck remained in New York, after the other members left New York.  Barbara and Ben Ireland returned to Seattle to involve themselves with a myriad of creative endeavors that continue to this day.  Ben became the drummer for Sky Cries Mary.  Barbara would later work with Pearl Jam’s Stone Gossard and later become a jazz singer as well as an author of a self-help book.  Paul Solger also retuned to Seattle and into an unusually fond place in the Seattle hardcore community.  Paul had been in high demand throughout his career, having played with The Fartz, 10 Minute Warning and a young, pre-Guns and Roses Duff McKagen.  Both Stone Gossard of Pearl Jam and Steve Turner of Mudoney cite Paul Solger as a major influence.  During this period Paul also co-wrote “Rehab Doll” with Green River.  Paul had dealt with his own drug problems for years and finally escaped to his hometown, Yakima WA after his own stint in Rehab.  He lived and cared for his elderly parents there, and still remains in Yakima.  In 2004 Paul was diagnosed with cancer  but was successfully treated after months and months of treatment..  The cancer took an incredible toll on him but he still makes occasional trips to Seattle and was able to take part in a reunion in 2014 with his old friend and co-founder of the band Solger, Kyle Nixon.  Over the years Paul has performed and recorded with his Seattle bands as well as Jayne County, Mark Lanegan and his old friend Duff McKagan.  From time to time McKagen still plays a guitar with the word SOLGER across it in honor of Paul and to honor his struggle with cancer.

Dahny Reed (Raphael) had also stayed in New York after the departure of the other Fags but instead of remaining in the city he gravitated to the far end of Long Island to work in an animal sanctuary.  Dahny had a life-long interest in the care and rescue of  animals.  In fact, before his becoming a member of The Fags he had worked at Seattle’s  Woodland Park Zoo.  This interest eventually led him to South Africa where he worked at an animal sanctuary.  Eventually he too made his way back to Seattle-with a wife and two daughters.  Domestic life didn’t sideline him though, and he was soon writing and recording as well as remaining a very gifted artist and painter.

While in NYC Upchuck formed a duo with Israeli producer/songwriter Schlomo Sonnenfeld. They called themselves Such, and ended up recording at Bearsville Studio in upstate New York with producer John Holbrook.  Finally Upchuck had his moment to shine-working in one of the most famous studios of all time with a legendary producer and sidemen that had worked with The Psychedelic Furs, Iggy Pop and Nina Hagen.  Sonnenfeld was always on the look-out for talent, and he would go on to “discover” and produce the first recordings of MC Lyte.   During this period Upchuck made frequent trips back to Seattle and re-united with The Fags when he was in Seattle. Some of their most incredible shows were held as “The Fags Macarroni and Cheese Bake-Offs”.  Along with The Fags, mounds of Macaronni and Cheese were served and fans brought the most outrageous concoctions using mac and cheese possible.  The winner of this competition was sure to be unexpectedly bizarre.  One of the band’s Macaroni and Cheese Bake-Offs co-incided with the Navy’s Fleet Week in Seattle.  Seeing the name The Fags on posters at the door gave some closeted sailors a chance to sneak into a bar they assumed was gay.  The bar was gay-friendly but not specifically gay, although the band had a large LGBT following.  Part of the magic of that evening was seeing drag queens, gay punks and sailors in uniform together in the same room slopping down loads of Velveeta-laden, over-cooked Macaroni.  Nothing like this can ever happen again.

While Upchuck had been recording an album at Bearsville he made another trip home.  He was exhausted and lost his powerful voice.  He was diagnosed with Tuberculosis.  More tests were taken and the worst possible outcome became a reality.  Upchuck had AIDS.  He was not just HIV+.  At that time there was no way to test for HIV and diagnoses could not be made before AIDS had become “full blown”  His album, which had been coming along so well had to be postponed.  It took about 10 months for him to be cured of the TB, but at the same time his immune system was failing.  In an act of courage he gathered his strength to return to NYC and do several live shows with Sonnenfeld and a stellar band.  It was at these shows that he told audiences he had AIDS, trying to give both himself and others some hope.  In 1988 it was practically unheard of to announce having AIDS in public, but he took a cue from old friends like Klaus Nomi and was open about his health.  Upchuck had been “out” since he was a child.  He had never apologized for it and never allowed it to be used against him.  Oddly enough even straight friends and strangers admired him for his gayness, and being so open about it.  They enjoyed his constant outrageous attire that went from the stage into his everyday life.  By allowing himself to be so open made him one of the bravest people in Seattle during his career there.

Upchuck made one last return to Seattle where he spent the last two years of his life.  AIDS did not prevent him from traveling to see friends though.  He made trips back to New York and to Los Angeles and London.  The Fags (and Such) were no longer ongoing projects, but he stayed in touch with his friends in Seattle’s music community.  As he began his final descent he was frequently visited by old friends and Seattle music luminaries.  It was almost as if they had come for an “audience” with him.  His greatest wish was to see his friend Susan Silver (one-time manager of Screaming Trees, Pearl Jam and her former husband’s band Soundgarden).  Susan arrived and they got to say their farewells .  He passed away the next morning.

In 2008 a collection of his recordings with The Fags, Clone and Such was released 18 years after his death.  At the time of it’s release Seattle writer, critic and NYT top 10 seller Charles Cross wrote ““This long-awaited CD from the legendary Charles “Upchuck” Gerra finally sets right one of the lost chapters in Seattle’s pre-grunge music era. Essential for anyone who loves punk rock, glam rock, or just groundbreaking music of any genre.”
The Advocate ended up calling him “The Gay Cobain” which seemed odd in one sense-and perfectly appropriate in another.  Upon the release of the CD the remainig Fags performed at a celebration of the release.  Ben Ireland, Barbara Ireland and Dahny Raphael reunited to do a set consisting of their old repertoire.  Phreddy Vomit joined them onstage in place of Upchuck as the vocalist.  A haunting presence was felt throughout the night as old friends and new fans mingled in the lobby of the King Kat Theater in downtown Seattle.  Pearl Jam’s  Stone Gossard, who, in a tip of the hat to Gerra, performed in drag. This reunion was so well received, that the band decided to reform The Fags as a working outfit. Rather than go the route of reviving their 80’s music, the band has chosen to write and record new music

The Fags reputation has continued to grow as music historians search for the elusive beginnings of Seattle “grunge” and modern rock.  It’s a fool’s errand, but it’s also likely The Fags were partially responsible for what would come later.  Although their music could hardly be labeled “grunge” it WAS manic, well played, dischordant at times and went places no other band dared to go…places they wouldn’t go even today.  Especially today.  Upchuck is now gone, but a few decades ago the band had made a promise to all go in a Fag Pile.  There’s no telling that won’t actually happen someday, somewhere far away in a place called Fagsville.