LIFE IN THE TWILIGHT ZONE
THE VISIBLE TARGETS 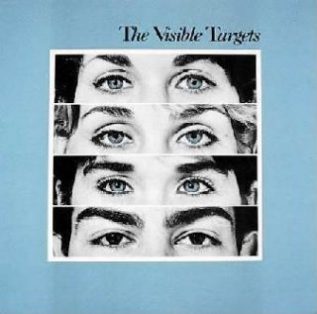 The Visible Targets, with the frontline of sisters Pamela Golden, Laura Keane and Rebecca Hamilton could have dressed up as babes.  They could have played covers for frat parties.  They could have been a “novelty band”.  Instead they chose to work within Seattle’s alternative scene, playing alongside art bands, punks and “loser” bands as well as the innovators.  It’s no wonder that the band was often scoffed at by the supposedly hip, more cynical and “serious bands.   The irony is those “hipper” more cynical audiences always showed-up at their shows.  The truth is The Visible Targets were original, musically talented and…fun.  They were secure in their musical talent and determination.  It’s fair to say they were the forerunners of the riot grrl movement that wouldn’t flourish for another

decade.  The sisters, originally from Yakima WA had paid their dues in cover bands and had even spent time in England trying to jump-start their career.  But it wasn’t until they returned to the US and recruited Ron Simmons as drummer.  Ron was an old friend of theirs from school, and he fit in perfectly.  With the sisters in front and Simmons in the back providing an excellent behind them the band (then known as Wreckless) set out to conquer Seattle-and further.  With their name change to The Visible Targets, and their musical and lyrical dexterity popularity was to come quickly with a dedicated fan base who loved their approach, their look, and most of all their musical and lyrical talent.

The Visible Targets first came to light via Bruce Pavitt’s 1980 ‘cassettezine’ Sub Pop 5. The band then caught the attention of Bob Jenniker, a successful record store owner in Portland and Seattle that had begun the Park Avenue Records label. Bob had released the The Wipers’ Alien Boy, Youth of America and Is This Real, all of them seminal recordings from the American underground. Jenniker was scouting for new talent for his label, and when he found The Visible Targets. He was so impressed he not only signed them; he became the band’s manager and dedicated friend.

The band reflected everything good about the ‘power pop” and new wave” music of the 1980’s. They had an incredible pop sensibility, a talented line-up with enough edge to satisfy serious musicians while appealing to fans that were more interested in being entertained than any of the complexities of what they were hearing. During their five year career they garnered major label interest, and took on national tours.  One of their tours was the Canadian leg of a worldwide tour by Simple Minds who were then at the height of their success. The tour gave them great exposure in Canada, but the US market still alluded them.

After touring with the The Simple Minds the Visible Targets had the great fortune to snag the legendary “Spider From Mars” guitarist Mick Ronson as a producer.   The result was their second EP “Autistic Savant”.  The EP omitted several songs that Ronson produced for them-one featuring Mick on piano.  He’s The Boy, which had been the the b-side of Little Eva’s monster hit The Loco-Motion was a fan favorite but not included on the Autistic Savant EP. The Ronson produced song from these sessions was finally released in 2012 on dadastic! sounds compilation That’s Dadastic!  At least two other songs have never been released, although the band members have the intention of releasing them on a CD/digital retrospective of their career some time in the future.

Their two EP’s ‘The Visible Targets’ and ‘Autistic Savant’ were well-received, but they never made as big a dent nationally as they should have. Their single, Life In The Twilight Zone is undoubtedly one of the most well-known songs to come out of Seattle’s 1980s music scene. But the hit was only a regional one and despite excellent live performances they were always on the look-out for that hit to provide them the national hit they sought.  In those days vinyl records and tapes by indie bands were poorly distributed.  Having to rely on self-promotion and the guidance of their friend and manager Bob Jenniker was not enough to send them over the top.  After a five year career, the band were gone and seemed to fade into history despite a large following of rabid Northwest fans…fans that remain to this day

“One summer in the mid-’80s we all decided that we needed a long overdue break. We had been performing, writing and practicing pretty much all the time, five to six days a week, for five years. During that time most of us worked day gigs to make a living. We were all exhausted and decided to take the summer off. After the summer, we just kept putting off getting back together, taking time to do other projects that we now had time to do. Pamela started visiting Nancy Wilson (of Heart) briefly and did some jamming. She then started working on a solo project with the help of Tony Levin (bass player for King Crimson/David Bowie/Material, et al). She put out one CD shortly after. Rebecca spent some time with various musicians mixing tunes and writing new ones. Laura spent more time with her family. I threw myself into painting and various art projects that I had a passion for; I showed my work quite a bit in the late 80’s through the mid 90’s in the Seattle area“.

After the demise of The Visible Targets Pamela and Rebecca, with the help of another close friend, wrote a CD’s worth of music (actually quite good), and called me to get back together for a possible reunion. I had already made a commitment to move to the Portland area and start up a publishing company for a close friend, so our reunion never materialized

A CD full of new material was self-released by the sisters.  The music is a broadening of what would probably been the trajectory would have gone forth with.  Unfortunately the problem of distribution still prohibited a wider release, and the band’s new moniker, “Wonderland” may have confused fans.  There were several groups using that name in the 90s.  No matter how great the music and musicianship it’s always difficult to amass a following when exposure is a problem.  Remember, the digital age had not taken hold yet, especially not in terms of independent artists to make their music available to millions of listeners.
According to Ron Simmons “Today, Laura is working for a college in the area, and Pamela and Rebecca started their own business in the service industry. They still pick up their guitars and jam. I am North Regional Publisher for a regional publication, still painting and showing my work in the area. We all still stay in contact. Bob Jeniker our manager and best friend, died around the late ’90s of cancer. He kept encouraging us to get back together, but it was just not in the cards”.

Even though The Visible Targets broke up decades ago they are fondly remembered by those who had the experience of seeing or hearing them in their heyday.  Life In The Twilight Zone is still regularly requested on local stations.  In 2007 former members of the band did an interview on Seattle’s KEXP.  The station also has a very strong presence on the internet with listeners around the world.  The lead-up to the interview garnered a great deal of interest, with many fans waiting to hear plans of a reunion-or at least a career retrospective that has not yet come to fruition.  One can only hope a compilation of all their recorded music is released one day.  It will be a testament to the power of well-written, well executed power-pop.  The music of The Visible Targets is timeless.

2 comments on “THE VISIBLE TARGETS”