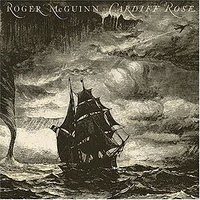 McGuinn wasn’t the most talented songwriter in the Byrds (that was Gene Clark) or the most innovative (that was Chris Hillman), but he was probably the most solid musician and definitely the classiest vocalist. On this album, though, he’s working at peak form and the end result is a minor classic. He’s backed by Dylan’s Rolling Thunder band (here called Guam) and producer-guitarist Mick Ronson, who throws a handful of gravel into McGuinn’s sometimes too-sweet sound. There’s also a strong focus and consistency that his often too diverse other albums lack. The original material — “Take Me Away”, especially — is fine, but the high points are songs by Rolling Thunder collaborators Dylan and Joni Mitchell, both unreleased at the time (and for years after). Of course it wouldn’t be a McGuinn album without a traditional song, and he turns in a lovely, chilling performance on the old ballad “Pretty Polly”. His best post-Byrds work? Almost certainly. –Brad