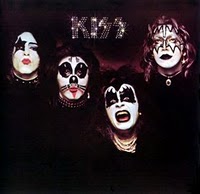 Before the merchandising, neon spandex, and nostalgia circuit, KISS were just another hard rock band with stars in/on their eyes. Kiss, the debut, is loaded with future klassics that display the Stanley/Simmons partnership’s knack for grafting pop hooks to bludgeoning riffs, sporting the likes of “Deuce,” “Strutter,” “Nothin’ to Lose,” and immortal hooker drama “Black Diamond,” a vocal-shy Ace checking in with urban intoxication anthem “Cold Gin,” and an overlooked gem in the simple charm of “Let Me Know.” While the less said about the “Kissin’ Time” cover grafted on to later pressings, the better, and ignoring the fact that a certain sluggishness drags some of these recordings down compared to their Alive! revamps, Kiss remains an auspicious debut. –Ben