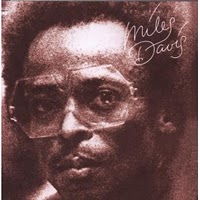 Without a doubt, one of the greatest albums of them all, a double set only comparable to the likes of the Stooges’ “Funhouse” in its darkness, intensity and raw, funky sexuality. Now for starters let’s get something straight: I loathe “fusion”, and to even CONSIDER putting Miles’ music of the ’70s in that category – a genre filled with lilly-livered chumps like Return To Forever and the Yellow Jackets – is a great disservice to Miles and his music. From 1969 to ’75, Mr. Davis pioneered and created his own unique sounds, a mixture of hard funk, psychedelic rock, avant-garde electronics and free jazz, that has never been equalled in regards to its sonics or its “vibe”. There is NOTHING that can touch the raised-middle-finger jab in the guts felt when one puts on discs like “Dark Magus”, “Live Evil”, “Agharta”, “Big Fun” or “On The Corner”. The feelings of utter loathing and despair, the overwhelming EMOTION of these discs can be too much, yet nothing can prepare you for 1974’s “Get Up With It”, a disc of such wildness and total lack of any commercial forethought (and thank the heavens for that) that it was granted pretty much instant deletion upon release and has mainly only been available from Japan for the last 25 years.

Start with the cover: a big, slightly unflattering, grainy photo of The Man. It’s the sight of a man against the world, battling for his own identity. Hit the first track, “He Loved Him Madly” (a tribute to Duke Ellington), a 32-minute ambient piece only broken up occasionally by Peter Cosey’s mumbling guitar lines. It’s one of the saddest damn songs you’ll ever hear, and you can bet yer booty that if it was made by a bunch of white guys in Berlin ca. ’71, every Krautrock freak in town would be hailing it as a classic. Next track “Maiysha” is a schizophrenic one. For ten minutes in merely putters along like a lite Latin number, interrupted sporadically by Miles’ Sun Ra-like organ, then it stops, gets into a hard groove and proceeds to move along to Peter Cosey’s awesome guitar screeches for another five minutes. Hot. “Honky Tonk” is up next, a brief interlude of stop-start rhythms and noisy organ crunch. It prepares you for the next track the unstoppable “Rated X”, THE peak of Miles’ – or maybe anyone’s – sonic capabilities. Part hyperdive breakbeat rhthyms, part uber-funk, and nine parts pure noise, there is no other sound on earth as MOVING as this song. Get up with it. Disc two starts with “Calypso Frelimo”, another 32-minute piece that starts where “Rated X” finishes off. Ecstatic peaks of dark psychedelic jamming, aided by Miles’ wah-wah’d trumpet, gel and compete. “Red China Blues” is a brief number that kicks it in a Chess-Records-meets-Ornette way, and the 15-minute+ “Mtume” once again takes you for a ride with its collision of Cosey’s guitar (a highly under-rated player in a field with the likes of Sonny Sharrock) and about half a dozen percussionists. Finishing is “Billy Preston”, more chilling mid-range avant-funk to close the set. “Get Up With It” is the perfect summation of what was filling Miles’ head at the time: the avant electronics of Stockhausen, the cyclical funk of James Brown, the wailing psych guitar of Hendrix, the improvised freeness of Ornette Coleman and as The Man himself put it, “a deep African thing”. Many words have been written on Miles’ music of this period, but to really GET it, you have to LISTEN to it. Not a word is spoken on GUWI, yet it speaks volumes on its creator’s alienation and sense of despair. As far as so-called “out-rock” goes, this is about as “out” as you could get, and certainly about as purely “psychedelic” as music has ever gotten, so do the done thing and get with it. –Dave