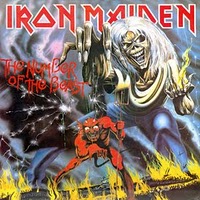 This is Heavy Metal before the genre had all of the Rock & Roll stripped away from it. Because it still has those roots, the album is refreshingly soulful and full of rich textures. Not to worry, though, it’s still plenty fast and heavy. “Invaders” crawls under your skin and sticks with you longer than the written-to-be-catchy chorus of the album’s big hit, “Run for the Hills.” Said hit is also a stellar track, however, as is the haunting “Children of the Damned.” Not to put too fine a point on it, but “Number of the Beast” rules! If you think that Iron Maiden is hokey, dated or “Satanic,” and you haven’t actually taken to time to listen to their work, then you are doing yourself a great disservice. Don’t confuse this classic with the throwaway nostalgia that was released by scores of imitators a few years later. Intricate, pounding, powerful and creative – if those are words that describe good music to you, then look no further than “Number of the Beast.” –Lucas