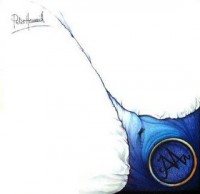 The absolute pinnacle of Peter Hammill’s solo career. The Silent Corner and the Empty Stage is every bit as impressive as the finest records from Van der Graaf Generator, although with most members of the (temporarily-defunct) Generator chipping in it’s arguable as to what degree this is a true solo album. Many of the tracks here are especially reminiscent of the intense vocal/sax-centric sound featured on the upcoming Generator classics Godbluff and Still Life, and fans of either of those albums will almost certainly love this release. Yet Silent Corner is a somewhat different kind of album than Hammill ever produced with the Generator. Every song here is extremely “intimate”, be it via deeply personal lyrics or via a stripped down production that brings everything back to Hammill’s voice. It’s also an extremely “weird” and “difficult” album, even compared to the average Generator release (only Pawn Hearts compares here). Bizarre lyrics, sudden shifts in dynamic, and absolutely no percussion until track four(!!!)- after dozens of listens there are parts of this album that I’m still trying to “figure out”. Yet before I scare away all but the most devout prog rock fans, let me emphasize that this album is totally worth your effort. A true classic of progressive music that repeatedly rewards the thoughtful listener via a wealth of magnificent details.

As for the tracks themselves, Silent Corner is bookended by what are arguably the two finest tracks of Hammill’s solo career: “Modern” and “A Louse Is Not a Home”. The first of those tracks contributes one of the most memorable opening sequences of any album from my collection, gradually developing into a glorious mindfuck of a song that perfectly epitomizes Mr. Hammill’s unique musical vision. The latter of those two tracks is representative of the record’s Generator-esque tendencies- a 10+ minute epic rocker in which Hammill’s energetic vocals are complimented by an equally-remarkable instrumental arrangement. Other highlights include a slow-building piano-driven “ballad” in “Forsaken Gardens” and another Generator-esque rocker in “Red Shift”. Preventing a perfect 5.0 star rating are the relatively straightforward ballads “Wilhelmina” and “Rubicon”, which carry over the “singer/songwriter” aesthetic that was more pronounced on the previous Chameleon in the Shadow of the Night. As with a number of tracks from that earlier album, I find both of these songs to be nice yet remarkably unmemorable.

Alongside the subsequent In Camera, the cornerstone of any Hammill collection. Strongly recommended to any progressive rock enthusiast, and a record that every Van der Graaf Generator fan should seek out. —Paul