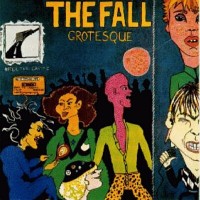 Hot on the heels of the immortal “Totally Wired” single, The Fall dropped “Grotesque” and really outdid themselves. Right out of the gate you get the rocking “Pay Your Rates” and a 180 turn into the chipper sounding “English Scheme,” a seemingly jolly number with an absolutely dirty electric keyboard bouncing throughout.

Mark E. Smith really becomes Mark E. Smith here as well: “New Face In Hell” and “C ‘n’ C-S Mithering” spews broken working man poetry over obscene instrumentals embellished by kazoos and backing tapes of who-knows-what. Side one ends with a more straightforward rocker, “The Container Drivers.” It may seem odd, but then Mark has cited Bo Diddley and Link Wray as some of his favorites, right alongside Damo Suzuki. He’s not afraid to not be weird and rock proper.

Side two kicks off with a militant rumble in “Impression of J. Temperance” and works it’s way in a similar fashion (apart from the incomprehensible mess of “WMC-Blob 59”) toward the closer of “The N.W.R.A.” or “The North Will Rise Again.” Being from Manchester and proud of it, Mark E. had to end with a near ten-minute opus to declare it. Rough and tough, Manchester and Mark E. may be synonymous in most ways. You can say that for The Fall too. -Wade