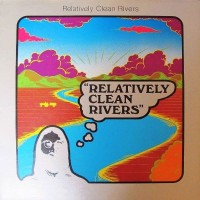 There’s an original copy of Relatively Clean Rivers’ first and only LP on the wall at a Portland record store that’ll cost you $800 (not a typo). It’s been sitting there for at least four or five years… although after this review goes live, probably for not much longer. Why the absurdly high price? I mean, Relatively Clean Rivers is a great record, but is it $800 great? Is any record worth that much? Maybe I’m not the best person to ask, as the most I’ve paid for a single album is $60. But enough about record-collector economics…

The brainchild of Orange County guitarist/vocalist/bassist Phil Pearlman (he also plays flute, “sahz,” harmonica, and synthesizer and is responsible for those crucial psych-rock opuses by Electronic Hole and Beat Of The Earth; his son was also a member of Al Qaeda, but don’t let that distract you from the sonic beauty at hand), Relatively Clean Rivers is a perfect combination of the Grateful Dead at their most concise and mellowest and Popol Vuh at their most accessible, e.g., Letzte Tage – Letzte Nächt. And if you love the Velvet Underground’s “Oh! Sweet Nuthin’,” it’s pretty certain you’ll dig Relatively Clean Rivers.

This music sounds like the archetypal output of stoned-to-the-bone American hippies in the summer of 1969: bathed in a golden glow of gentle acoustic and electric guitar ramble and choogle, bursting with yearning melodies that twang your heart strings with utmost delicacy, and topped with Pearlman’s peace-mongering lyrics (“Hoping we an all get together, the Arabs and the Jews/And melt down weapons into water sprinklers”) and just-soulful-enough, Garcia-soft vocals. Every song’s a blessed wallow in laid-back melodiousness, with just enough rhythmic oomph to get your hips swaying and your upper lip sweating. Front to back, RCR keeps your manageable high at a sensible hum. It sounds best at sundown by the water with your tightest homies (especially “Hello Sunshine”), but these songs can elevate your mood wherever and whenever you happen to be.

In actuality, Relatively Clean Rivers is so great, I can’t fully trust anyone who doesn’t love it like Donald Trump loves attention. But I still wouldn’t pay 800 freakin’ US dollars for it. So thank you, Phoenix Records, for the reasonably priced reissue. -Buckley Mayfield