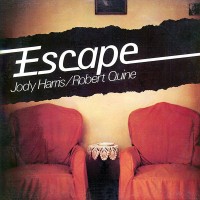 Talk about an unheralded masterpiece… Escape is a ludicrously under-acknowledged gem from New York City’s fertile early-’80s sonic crucible. Masterly guitarists Jody Harris and Robert Quine had their tentacles in some of the Big Apple’s most important groups of the ’70s and ’80s, including Contortions, James White & The Blacks, Implog, the Raybeats, and Golden Palominos for the former and Richard Hell & The Voidoids, Material, and Lou Reed for the latter. For Escape, Harris and Quine use guitars, bass, and electronic percussion to create a uniquely otherworldly work of rock that has few peers.

The 12-minute “Flagpole Jitters” must’ve boggled freaks’ minds aplenty when it first came out, even among those who traveled in the headiest of No Wave and post-punk circles. Oddly funky electronic percussion pistons nonchalantly while Harris and Quine engage in a frenzied guitar duel that sounds like Television—if Verlaine and Lloyd’s axes were retuned by Harry Partch. The shrill tonalities and frazzling intensity of the playing shove this epic song into a WTF plane of its own, a communiqué from an advanced species recreating rock according to its own utterly bizarre instincts. Seriously, it’s damn near impossible to hear rock the same way after you’ve been exposed to “Flagpole Jitters.”

By comparison, “Don’t Throw That Knife” can’t help seeming a tad anticlimactic; it tones down the extreme timbres and settles into an intoxicating, low-slung cha-cha groove as Quine and Harris brandis pointillist, crystalline six-string origami. The effect is not unlike some of the more tropical cuts on Can’s Ege Bamyasi and, perhaps coincidentally, some of Robert Fripp’s extended and exotic sonorities on King Crimson’s Discipline. Be very excited. On “Up In Daisy’s Penthouse,” relaxed drum-machine rhythms percolate under slanting, clangorous guitar murmurs and enigmatic sighs. It makes me think of Muzak™ that might be heard on Pluto, which is a high compliment.

Escape‘s most urgent, driving rocker, “Termites Of 1938” zips with persistent hi-hat tsss and guitars that bite with the alien causticity of Chrome’s Helios Creed; eventually, said guitars pile up into huge parabolas of barbed wire; voilà, a new kind of raveup. “Pardon My Clutch” ends the album with what sounds like a 11-minute rockabilly pastiche from a couple of futuristic dudes who genuinely respect the style, but can’t help subverting it with slurred slivers of Harvey Mandel-esque guitar ectoplasm that are humorously at odds with the jaunty, canned beats.

I would say seek out Escape ASAP, before mugs read this review and start jacking up the price beyond its current reasonable $10-$15 range. -Buckley Mayfield