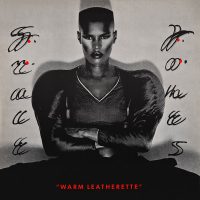 I’ll never forget the first time I heard Grace Jones’ cover of the Normal’s “Warm Leatherette.” It must’ve been on a specialized program via Detroit public radio in the early ’80s. I was familiar with the original, by future Mute Records boss Daniel Miller. I loved—and still love—its relentless minimalism and abrasive synth tones going off like a haywire car alarm—apt for a song about the unexpected eroticism of a vehicular accident. (Thanks, J.G. Ballard.) Miller sings the macabre song with all the emotion of an automaton, which was somehow perfect for its lyrical circumstances. Jones, a black Jamaican woman, made “Warm Leatherette” sound even colder and more menacing than the nerdy white Englishman mustered.

How could this happen? The short answer is, Grace Jones is a freak of nature, an enigmatic woman who’s more man than most men will ever be, while also being a legit goddess. Why did this happen? Because, if I may conjecture, Grace Jones loves to take risks and subvert unlikely songs until she overshadows the original versions. The result with the title track of her fourth album is supremely unnerving and riveting.

Jones’ decision to cover “Warm Leatherette” must’ve seemed like a total WTF?! to Island Records’ execs, but in hindsight, it was a genius move. With a band full of session badasses like Sly Dunbar (drums), Robbie Shakespeare (bass), Wally Badarou (keyboards), Barry “White” Reynolds (guitar), Michael “Mao” Chung, and Uziah (Sticky) Thompson (percussion), Jones’ “Warm Leatherette” is bound to sound vastly different from the Normal’s synth ditty. She and the band use a crescendoing power chord to sub for the original’s synthesizer wheeze, while Badarou quotes James Brown’s “Sex Machine” riff. The rhythm is a juggernaut of funky skank, helping to transform this “Warm Leatherette” into a vastly different vehicle, as guitars and keys emulate siren sounds near the end. You could almost party to this rendition, if you were perverse enough.

Whew, it’s exhausting just trying to do justice to that Normal cover. Warm Leatherette has seven other tracks, most of them covers that deviate with almost as much idiosyncratic panache. The Pretenders’ “Private Life” sounds like a Sade tune, but with much more dubwise gravitas. Jones & co. inhabit Roxy Music’s “Love Is The Drug” as if it’s a skintight blue-velvet jumpsuit, slightly skanking up the disco-funk rhythmic chassis and adding staccato guitar-clang punctuation.

The silky Motown soul of Smokey Robinson & The Miracles’ “The Hunter Gets Captured By The Game” gets an uptempo revamp with much more robust drums and bass and an extended percussion breakdown. Tom Petty’s “Breakdown” lends itself easily to slouching into a laid-back Jamaican groove, and Jones stretches her usual taut delivery as far as it can go. It can’t surpass the late Mr. Petty’s yowl, but she gives it a valiant try.