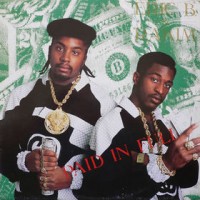 Run-D.M.C. proved hip-hop was a genre that could stand on it’s own and they also laid the foundation for hardcore rap. Fast forward to 1987, rappers all use pretty simple, elementary rhyme schemes and enter Eric B. & Rakim’s album Paid In Full. In this album, Rakim revolutionizes the art of rapping completely by himself. Instead using the simple rhyme schemes of the past, he introduces the use of multi-syllables, similes and internal rhyming to hip-hop music, making his brags a lot more serious. And he doesn’t really touch on any real subject matter either, most of it is just him bragging about how dope he is and how great Eric B. as a DJ is, but he does touch on the topic of money with “Paid In Full” where he claims rapping pays off and also touches on his 5% ‘roots’, a group which he joined shortly before starting his rap career. As a braggart, Rakim is simply sick, songs like “My Melody” and “I Know You Got Soul” are all-time classics and got quotable for days, so they never get old. Although most claim that Eric B. does the production, it’s in-fact Marley Marl who does lots of scratching and produces two cuts (“My Melody” and “Eric B. Is President”) while Rakim takes care of the rest. The back cover credits “Eric B. & Rakim” as the producer of the album, which makes Eric B.’s shady act even more suspect as a fake that took credit for other’s work. Regardless, this album is simply awesome and the production is also notable for introducing James Brown samples to hip-hop – something many rappers went crazy with for the few years following 1987. A classic that is one of the most influential albums ever and it’s crazy how 8 years had to go by for this album to reach platinum sales. It’s your duty as a hip-hop fan to be familiar with this album and also know at least two songs in their entirety or else you wont be approved by me. (not that anyone cares, but hey, that’s just how it goes!) –Prt Cpt