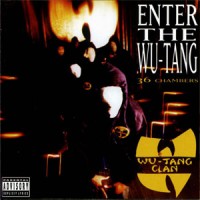 The RZA and GZA both were dropped from their label when their A&R influenced debuts bombed. So what did they do? They recruited 7 others of Staten Island’s finest (or as they say Shaolin) and got together to release their first single “Protect Ya Neck”. An impressive posse cut that included all but one member where every MC delivered. So in 1993, they planned to take over hip-hop and the east coast in specific with their debut, Enter the Wu-Tang (36 Chambers) and they really succeeded. This album is a classic to the fullest and features 9 different voices throughout. Each MC delivers at every chance they get and their energetic battle raps never get old. There’s so many excellent tracks to choose from, this album never bores. RZA is the mastermind of this ambitious project and he handles all the production. To say he changed the direction east coast producers took is an understatement. He brings a fully new production style which has some dark soundscapes that is simply excellent. RZA is one of the greatest producers ever and his work on this and the many Wu-Tang solo albums that followed in the five years after are proof. His production work is magnificent in here and you have to hear it to believe me. In addition, there’s some small amount of variety with “C.R.E.A.M.” which features an excellent, legendary hook by Method Man (the most commercially visible member) and two classic verses from Raekwon and Inspectah Deck about the ruff, fast lifestyle in the streets of New York. Although the interludes where the members are talking get annoying real fast (except the intro for “Method Man”, that one is a classic), the beats and lyrics are too good to be brought down by their retarded act when they talk. Oh yeah, RZA is also innovating new sampling sources by getting a bunch of kung-fu samples, most notably on the first few seconds of the album when “Bring da Ruckus” starts. 36 Chambers is simply a classic and words can’t justify how good it is, really. This album along with Da Beatminerz’ work on Black Moon’s Enta Da Stage and DJ Premier on Jeru the Damaja’s The Sun Rises in the East pretty much defines the beats of hardcore hip-hop in the east coast. —Prt Cpt