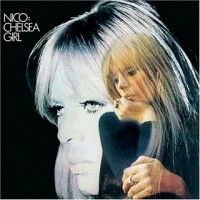 O Nico! Demure melancholic, wanton femme fatale! Warbling siren of ennui and hopelessness! With the defeatist longing of an Old World aristocrat, the deadpan sexuality of a courtesan, and the glazed-eyed fragility of a junkie, Christa Päffgen cultivated an impressive cult of personality. She gallivanted around an abandoned castle in La Dolce Vita, fraternized with the scenesters and freaks at the Factory, and briefly fronted the Velvet Underground. She didn’t conform to any presubscribed roles for female musicians; she wasn’t an earth mother, a self-righteous folkie, or a wide-eyed innocent teen temptress. If anything, she was an ur-goth, an artist plagued by darkness and haunted by her insecurities. Chelsea Girl, her debut as a solo artist, is Nico at her most vulnerable and sad. With her inimitable near-baritone, baroque orchestral accompaniment, and help from talented songwriters (mainly former bandmates Lou Reed and John Cale, and also a pre-California Jackson Browne), she inhabits emotions rarely explored in pop music: heartbreaking, immobilizing indecisiveness in the soaring “the fairest of the seasons,” world-weary detachment in “these days,” and seasonal affective despair in “winter song.” The most explicitly experimental track – “it was a pleasure thing” – is a Celtic death ritual with Nico moaning ethereal high notes over a din of feedback and lacerating guitar. Dylan’s “I’ll Keep it With Mine” – one of the few tracks with no minor chords – serves as a rousing counterpoint to the dour misery mire that surrounds it. Though Nico would later delve into more abstract territory, this record captures all the tragic, twisted beauty that defined one of pop’s most compelling figures. —S Paul Brown