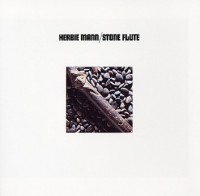 One of the pleasures of working in a record store are those quiet weekday afternoons when you can randomly throw on forgotten records in hopes of unearthing a buried gem. Stone Flute is one of those gems. It’s also a far cry from the middle-of-the-road soul-jazz I generally associate with the furry Mr. Mann. (For all it’s guilty, funky pleasure, this is no Push Push. It’s one of the few records Mann recorded for his own Embryo labe, best known for its moody, trippy jazz and jazz-rock, and Stone Flute is no exception.

Standout tracks are the spacious, Eastern-inspired Donovan cover “In Tangier,” and the jaw-droppingly beautiful version of the Beatles’ “Flying,” which somehow manages to be even trippier than the original without sounding dated. If that wasn’t enough, the experimental “Miss Free Spirit” features jazz gods, Sonny Sharrock, Roy Ayers and and a pre-Weather Report Miroslav Vitous in top form. The album features lengthy, spacious arrangements that are difficult to digest properly with a quick listen, give it a thorough spin and you’ll discover a totally unique Herbie Mann record and one that any fan of late sixties/early seventies jazz will likely enjoy. –David