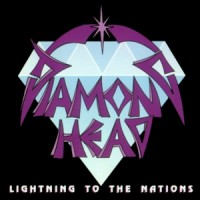 When asked about music in England in the late 70’s, most anyone will reply with Punk. The images of the Sex Pistols decked out in Vivienne Westwood gear, Ian Curtis on stage in the fits of a seizure, and the classic Kings Road punks with safety pins through their cheeks. The media sensation around the scene was such a whirlwind it seized that little chunk of pop cultural time and handed it over to the punks. Fair enough. But while all that ink has been spilled about punk and its mutant offshoots, there was another, equally as important scene running parallel around the same time, and in the same place. Kids who grew up on the hard rocking sounds of Black Sabbath, Budgie, early Judas Priest, Zep, UFO, Deep Purple, Rush and Thin Lizzy. Working class youth who did not necessarily connect with the politics and fashion of punk. They remained loyal to the no-nonsense rock they were weaned on and did not cut their hair short in the summer of ’76. These kids had no time for the lofty art school pretension of the punk movement, yet they were too close to the impact of it to not be affected the anger, brevity and do it yourself ethos. When those elements of early punk were applied to the already fossilizing hard rock scene, a new and brilliant sound was born. The old form was trimmed of its excess fat, given a facelift and a new sleeveless denim jacket. As this fresh and revitalized take on hard rock and early metal was forged in England, the bands springing up in its wake went on to not only define classic Heavy Metal, in sound and look, but to change and shape rock in the long run just as much as the punks. This sound was christened…The New Wave of British Heavy Metal.

As this new scene took shape, younger bands like Iron Maiden, Diamond Head, Raven, Samson, Angel Witch and Saxon were gaining quite a devoted following of headbangers. The mainstream music press largely laughed it off, as it was in sharp contrast to the tepid new wave that was selling so well at the time. The die hard fans had created a demand for vinyl though, and independent labels, often run by fans with a true emotional investment in the music began to dot the landscape. Labels like Neat, Guardian and Heavy Metal Records were quick to meet the demand and began releasing single after killer single. Compilations served as an excellent way to showcase these new and numerous bands and these began to flood the import bins of record stores on the other side of the pond, and America too had developed a taste for NWOBHM. Neat Records from Newcastle is arguably the biggest label in the scene and released some of the most coveted and important records of the genre. The god-like Venom being the most well known. Interestingly, while punks mentality was one of ‘out with the old, in with the new’ the reverent NWOBHM fans stuck with their old favorites too and bands like Budgie and especially Judas Priest and Black Sabbath saw quite a resurgence during this phase. Countless fresh faced new metal bands were energized and began releasing LP’s and 45’s, touring consistently and influencing thousands of young kids around the globe to pick up guitars and give it a go. The ensuing international underground metal scene owes a giant debt to these bands. Metallica, Slayer, Celtic Frost, Mercyful Fate etc. all were formed out of a passion for these early British sounds. These bands ramped up the speed, aggression and image, helping lay the foundations for Thrash, Death and Black Metal a few years down the road. None of this would have been possible without NWOBHM bands like Venom, Blitzkrieg and Holocaust laying the rock solid foundation in the U.K. years prior.

New Wave of British Heavy Metal is so vast and varied in sound its impossible for me to list all of my favorites. So I will suggest a few LP’s and compilations to give a decent overview. The movement was given a blanket name, but the bands range in sound from the melodic AOR hard rock of Praying Mantis and Dark Star to the punky proto-hardcore assault of Venom and Jaguar, to the doomy stoned Sabbath worship of Pagan Altar and Witchfinder General. So here is a few of my favorites, but this is by no means a definitive list. Just a small torch to guide you through the ruins of this ancient and magnificent castle…

1. Diamond Head Lightning to the Nations (Happy Face, 1981) Unsurpassed masterpiece of the genre, and on a larger scale, all of rock itself. Perfect mix of fast and mid-paced hard rockers with one foot firmly in the 70’s and one foot in present, or 1980 in this case. Sean Harris delivers some of the best vocals ever laid down while Brian Tatlers riffs are poured out like thick but still liquid concrete into a steel foundation. Impassioned, intense and with astounding production, this band should be as renown as Sab, Zep and Lizzy. Most of my generation was turned onto them via Metallica’s covers of Am I Evil on the rerelease of Kill ’em All or Helpless on the Garage Days Revisted record in 1987 which blew my 10 year old mind in half. Fault Lars Ulrich all you want, the guys choice of cover material was top shelf back in 1987. Essential.

2. Roxsnax/Roxcalibur Compilations (Guardian Records, 1980-1982) These are two label showcase LP’s recorded in ’80 and ’82 respectively, put out by the consistently excellent Guardian records. Absolutely amazing tracks from lesser known acts like Samurai, Hollow Ground, Saracen, Battleaxe, Marauder, Satan etc. Highly recommended for those of you looking for some of the most honest and true Heavy Metal from England at the time. Right down to the layout, song titles and band choices, these compilations embody the movement in my opinion. Follow these two comps up with the third in the series, ‘Pure Overkill’ from ’83 (featuring the amazing Spartan Warrior) for a birds eye view of what was going on at the time. A great starting point for those curious about the grittier underbelly of the dragon.

3. Iron Maiden Iron Maiden (EMI, 1980) The longest running and best known band to emerge from the NWOBHM, Iron Maiden’s first 2 LP’s feature Paul Dianno on vocals. Later replaced by the equally great Bruce Dickinson, Paul had way less range, but makes up for it in spades with his gruff, raspy and street sounding voice. Even on their first full length they are polished beyond belief, and playing with that accomplished fire and precision tightness that they are infamous for. Eddie on the cover looks like Paul sounds on the mic. The way they juggle scholarly technique with an almost amateur, punk sensibility and intensity is, and always will be, second to none. They became a legendary band for a reason and this record was the first major step in an unrelenting urge to run free and ahead of the pack.

4. Venom Black Metal (Neat, 1982) An obvious choice indeed, but Venom changed the entire landscape of music with this beast. The punk production and extremely occult atmosphere not only started the entire black metal movement but gave it a name and a plan of attack. Venom speaks with a harsh tongue, and those of us lucky enough to understand their dialect will forever be rewarded. Unlike anything before it and continually inspirational to this day. Neat Records made many wise choices. This may have been the wisest.

5. Legend Death in the Nursery (Workshop, 1981)
Their 2nd LP, and my favorite (although the self titled LP released prior is as good) Legend played a sophisticated and refined style that retained the flair and showmanship of the 70’s hard rock bands (think Stray etc.) but had all of the stripped down intensity and drive of the moment. Opening song ‘Choices’ might be one of my top picks of the entire era. Peter Haworth’s soloing and riffing on this record is punishing, lyrical and relentless. I would liken the power of ‘Death in the Nursery’ to that of a bulldozer, made out of an ultra lightweight compound that does not exist anywhere on the periodic table. If there was any justice in the world bands like this would be on the soundtracks to films like ‘300’ and ‘Clash of the Titans.’

6. Holocaust The Nightcomers (Phoenix, 1981)
Brutal and tough Scottish NWOBHM played by one of the most unpretentious and committed sounding bands I have ever heard. Their previous 12″ single for Heavy Metal Mania is mindblowing as is the followup single for Smokin’ Valves but their first full length LP The Nightcomers is a truly complete statement. The mid-tempo riffing and rough production is a killer combination, as the the crushing weight of the songs is really emphasized by not playing them too fast. True heavy metal with attention to melody and nuance, yet still managing to unleash the most primal urges. Listen to the song Death or Glory, or better yet look up footage of them on youtube playing it in a club in Edinburgh in the early 80’s and try to not bang your head until it falls off. I dare you.

7. Lead Weight Compilation (Neat, 1981) A Neat Records sampler that is quite common even today (a great start for any NWOBHM collection and can be picked up on ebay for around 10-15 dollars) and features the classic Neat roster in peak form. Tracks from Raven, White Spirit, Venom, Axe, Blitzkrieg, Aragorn, Fist, Axis, Bitches Sin, Warrior and Satan’s Empire.

Further Listening: Seeing as the New Wave of British Metal was driven by demo cassettes, live gigs and (often) self released 7″s, the scene was so vast you could spend years unearthing new bands and still have not scratched the surface. Lars Ulrich compiled an excellent 3 CD set called ‘Lightning the Nations’ which features almost 60 tracks of top shelf NWOBHM. A great place to check out some lesser knowns and then decide if you want to explore their catalog deeper. Of course, there are more well known groups who did not make the above list but are stone cold classic and I left off due to space constraints, Angel Witch, Jaguar, Gaskin, Saxon, Samson, Raven, Pagan Altar, Witchfinder General etc. are all well worth investigating. Label compilations are always a great starting point and Heavy Metal records did the Heavy Metal Heroes series which I highly suggest too. New labels are reissuing classic titles and demos at an alarming rate and Iron Maiden is still touring. Being between a rock and hard place is good for once. —Gary Abernathy