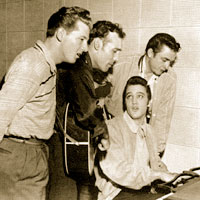 For the uninitiated, the idea of discussing Rockabilly as an independent genre might seem unnecessary. Isn’t the word just a descriptor for early rock and roll, the remarkable if somewhat overplayed work of Rock’s founding fathers, the stuff that gave birth to all that came after? Isn’t it just “oldies”? In one sense, yes, those classic songs we all know, put out by the likes of Jerry Lee Lewis and Carl Perkins, are indeed Rockabilly, and formed the trunk of the rock and roll tree. But oldies? Ah, think again, Grasshopper. Though the sound that was early Rockabilly certainly did morph into all we’ve come to know as Rock, the core sound has remained alive and vital since its inception. Dare I say it? When it comes to Rockabilly, there remains a whole lotta shakin’ going on.

But what is it? What makes something a Rockabilly song? While there is no single definition that is likely to please all, Rockabilly at its essence is a blend of Country and Blues. If Rockabilly is the trunk of the rock and roll tree, it owes its growth to the healthy roots of the earliest American sounds, which until the 1950s could arguably be broken into two categories: white music (incorporating the varied elements of County), and black music (including all aspects of Rhythm and Blues). During the era of segregation, access to music was segregated as well, and the lines between Country and Blues were more distinct. As the U.S. moved into the World War II and post World War II era, several factors combined that came to influence the development of rock and roll: rationing and war recruitment made it difficult to maintain the large touring bands of the Swing era, massive population shifts meant more interaction between different racial groups, post-war affluence and stabilized family structure allowed American teen culture to develop, and the invention of FM radio meant teenagers had access to music they had never heard before. The resulting blend of white and black sounds and culture are responsible for what we know now as the Rockabilly sound.

The first wave of music resulting from those historical forces is what most people know as Rockabilly, and one cannot seriously examine that generation without discussing Sun Records. Sun, the brainchild of Sam Phillips, was a Memphis recording studio founded in the early 1950s. Phillips is famous for recording and producing work by Elvis Presley, Carl Perkins, Johnny Cash, and Jerry Lee Lewis among others, and he is credited with creating the original Rock and Roll sound. “Rocket 88”, a song often cited as the first Rock and Roll (and first Rockabilly) song was recorded at Sun, and in some ways represents the racial and musical divisions of the time. Though Sun is most noted for work with white musicians who incorporated a black sound, African-American artist Jackie Brenston first recorded “Rocket 88” at Sun as part of Ike Turner’s Kings of Rhythm band. Interestingly, though Sam Phillips recorded the song, he gave it to Chess, a dominantly black label, for release.

Other notable artists of the time included Gene Vincent, most noted perhaps for his hit “Be-Bop-a-Lula”, Eddie Cochran, whose “20 Flight Rock” was made famous in the film “The Girl Can’t Help It” and whose “Summertime Blues” was a hit for both him and later The Who, and Bill Haley, who also recorded and released a version of “Rocket 88”, and who would later score hits such as “Rock Around the Clock” and a version of “Shake, Rattle, and Roll”. A bit of sleuthing into any of these artists, or others such as Chuck Berry, Billy Lee Riley, Joe Bennett, or Bo Diddley, can lead the interested newbie to scores of others from those early years.

As the new sounds of the 1960s began to dominate the airwaves, Rockabilly faded into the background, or rather was incorporated into the styles of new chart toppers such as The Beatles and The Rolling Stones, both of whom were deeply influenced by early American Rockabilly. Numerous artists continued to play “pure” rockabilly, however, and the 1970s and 80s brought what some would consider the second wave. Artists such as Sleepy LaBeef (pictured), Ronnie Dawson, and Ray Campi led the pack, though none were new to the scene. Sleep LaBeef, for example, had been recording since the 1950s, and joined the Sun roster in 1970. His career exemplified the “big in Japan” element that sometimes characterized rockabilly of the era. LaBeef’s popularity increased in Europe while never cracking the charts in the United States, even as nostalgia for the music began to emerge in mainstream American media with films such as “American Graffiti” and the television show “Happy Days”.

One European who was strongly impressed by Rockabilly was Ronnie Weiser (pictured), who would eventually move to the United States and form Rollin’ Rock Records, a label devoted to the sound. Weiser, a seminal figure in the “rebirth” of Rockabilly, reissued numerous recordings from the early days, and eventually began to release new material, including music from The Blasters, who became part of a larger collection of Rockabilly artists who would thrive in the 1980s.

1980s Rockabilly was often marketed as a kind of New Wave music, and it was during this era that Rockabilly began to split into its own set of sub-genres. The Blasters continued to thrive as part of the L.A. Punk scene, and a cover of their song “Marie, Marie” was a U.K. hit for Welsh artist Shakin’ Stevens. The Stray Cats (pictured) had enormous mainstream success with hits such as “Stray Cat Strut” and “Rock This Town”, though interestingly they had to move to England in order to get their first big break. Other bands of note from the time included The Polecats and The Rockats. Sub-genres, born of a blend of Rockabilly and other genres including Punk, Garage, and Surf, would birth new artists such as The Reverend Horton Heat, The Cramps, and Jason and the Scorchers. Numerous disagreements have since ensued regarding which of these and other artists are or are not authentic Rockabilly, who veered too much toward pop, who sold out, and so on. While occasionally divisive, the fact there was and is a large enough body of work to argue about speaks to the strength and permanence of the Rockabilly sound itself.

And lest you think Rockabilly is only a boys’ town, rest assured the ladies have been making their mark from the beginning. A woman named Willie Mae “Big Mama” Thornton recorded the original version of “Hound Dog”, after all, later made famous by Elvis Presley. Wanda Jackson (pictured), known as the “female Elvis” has been working her distinct growl and hiccup since the early 1950s. Jack White, a devoted Jackson fan, recently worked with her on the 2011 album, “The Party Ain’t Over”, for which she toured steadily as the opening act for Adele. Other women from the early years include Barbara Pittman and Janis Martin, and there are numerous successful modern artists such as Rosie Flores, Marti Brom, and Kim Lenz. Lisa Pankratz, one of the most respected and in-demand Rockabilly drummers of the present day, is a woman as well.

Today, Rockabilly is thriving around the world, and though none of today’s artists are breaking through to crack the auto-tune dominated modern charts, numerous bands record and tour successfully for a wide international audience of devoted fans. Notable artists of the last two decades include High Noon, Big Sandy (pictured), Deke Dickerson, Ray Condo, and literally hundreds – if not thousands – of lesser known acts around the globe, many of which are connected in an intimate and tightly woven network that extends from the former nations of the Soviet Bloc to South America, and new voices steadily continue to enter the ring. Check out JD McPherson and Lanie Lane for a start.

Finally, few musical genres have spawned so defined a lifestyle. Though music remains the heart of the Rockabilly world, the clothing, hair, cars, and conventions are a serious accompaniment for many. Numerous annual conventions, such as Viva Las Vegas in Las Vegas, Nevada and the infamous Hemsby Weekender in England, sell out every year. All told, between the fashion, the records, and the travel, Rockabilly could be said to have its own thriving economy. It even has its own Hall of Fame. Though Rockabilly will no doubt continue to have its share of lean years and occasional break out stars, it is safe to say the sound will continue to make its appearance in both leading and supporting roles for a long time to come. —Tamara Bunnell

One comment on “A Whole Lotta Shakin’ Goin’ On:
A Guide to Rockabilly; Past and Present”