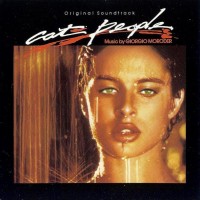 Another record I dismissed on first sight, Cat People has become a go-to, both for Djing and home listening.  Although I’ve still never seen the questionable-looking sci-faux film this was made for, it’s almost beside the point.  This thing could have been made to soundtrack an instructional guide to the cat’s cradle and it would still rule.

Cat People followed Moroder’s American Gigolo soundtrack by only a couple of years, but the departure from the Italo-disco sound he helped trademark is considerable.  Everything here is slowed down to a twilight half-speed.  David Bowie’s “Putting Out Fire (With Gasoline)”, a slow-to-ignite, soul-rock number, actually sounds more at home here than on his chart-busting Let’s Dance album, and is the most muscular piece by far.  Breaking the synth lines and drum programming of his earlier work down to a sinister, skeletal slow-pulse proved yet again Moroder’s vision in his unflinching willingness to break with the past to stay a step ahead of the game.  However, this time it would be nearly 20 years before the bedrock vibrations emanating here were felt at all, first surfacing in the brief synth-electro revival of the early 2000s, and more recently in the narcotic crepuscule of Chromatics, who brought the new crop of interpreters to wider recognition with their work on the Drive soundtrack.  A direct line can be drawn from Cat People and everything Chromatics producer Johnny Jewel and his Italians Do It Better label have done to bring the new wave of synth-italo-disco to the masses in the last half-decade.  The heavily reverb-ed, delicately plucked and muted guitar lines and cinematic synth wash of Chromatics, Glass Candy, Desire, and their current legion of followers can be traced directly to this record, one of the most compelling and original records of it’s era, soundtrack or otherwise. –Jonathan Treneff