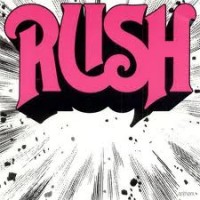 Rush’s debut is a ’74 Camaro, black, with purple and white racing stripes, 8-track blaring, one guy in a Sabbath t-shirt, the other dressed like Robert Plant in The Song Remains the Same … and not a girl in sight.

An album that carries a lot of nostalgic weight among rockheaded people like myself — the band still play a couple of these tracks on tour — this sums up the mid-70s rock and roll like few other albums, an innocent time when the guitar riff was king. Rush-haters might even find a lot to like about this roughshod bit of Zeppelinesque riffage. Certainly Alex Lifeson’s guitar tosses off riffs and solos that are preternaturally awesome. But Geddy’s knack for a lyric hook is evident as well. And even if they do sound like a cover band (mostly playing cuts from Led Zeppelin II and III), they’re a killer one, and this is one of the most energetic releases of ’74, and, speaking as a Rush fan, this one nearly 40 years on is freighted with a bit of melancholy, making it one of my favorites from the period. —Will