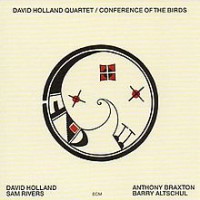 This is not an ordinary record in any respect. Free jazz and the 1960s avant-garde had ironically generated its own conventions. Conference of the Birds ignores them and sets up its own outstanding performance standards for both individual voices and ensemble. The compositions are all Holland’s, inspired by the dawn chorus outside his flat in London in the early summer mornings.

The first theme, “Four Winds” is a delightful opener, marked by Holland’s characteristic firm, precise fingering. The bass immediately sets the atmosphere of the record: a light, free dance of notes. Holland’s bouncing fingering sharply contrasts with Barry Altschul’s fizzing cymbals. Sam Rivers and Anthony Braxton converse almost indistinguishably, politely exchanging commentary. On “Q & A” Altschul converses with himself, quietly alerting his companions, who gradually make their appearance with little interjections. These fragments progressively accumulate to form a kind of dance of free individuals, like birds pecking at grain, each jumping according to its own whim, chasing its morsel. Then, the title-tune, “Conference of the Birds”; It’s one of the great compositions of jazz, perhaps the most distinctive and memorable 1970s original (in retrospect, an accolade it should probably share with Weather Report’s “Birdland”, released four years later). It is a delicate, contemplative song to beauty and quietude, both melancholy and uplifting, evocative of both aching loneliness and the intimacy of companionship. Holland’s double bass figure must be one of his most celebrated. Altschul’s marimba is divine in its simplicity, accompanied by the plain, unadorned flutes of Braxton and Rivers. “Conference of the Birds” is almost like the calm before the storm – the track that follows it, “Interception”, is a wild, intense vehicle for each soloist to give free rein to his passions. This is followed by “Now Here (Nowhere)”, the most spacious of all six pieces. It offers a cautious reconciliation to dissenting voices after “Interception”, underscored with the ubiquitous bass. Holland cultivates a tone here honed into a ovoid, sculpted sound with a hint of vibrato. Finally, on “See-Saw”, we have Altschul again creating a effervescent ambience to a blistering Rivers solo. This is the final climax to an awesome, astonishing album, one of the great classics of the post-free era. —Ricard