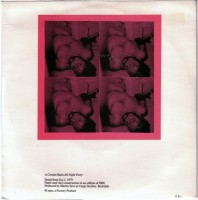 Like any first time infatuation, you tend to ignore the flaws in someone or something special and love a person or idea wholly, your affection unrequited… The Manchester label Factory Records was my all-time favorite while coming of age. And some releases from Factory just don’t quite have the staying power I thought they had a bit less than a decade ago.

The obvious issues (Martin Hannett’s unique but overrated production values, The Happy Mondays as a flagship band) are pretty well known by now. Thanks to the film “24 Hour Party People” and a number of books, the best of all being James Nice’s history-in-place-of-legend “Shadowplayers: The Rise and Fall of Factory Records,” I can skip the flogged subjects of Joy Division and Tony Wilson and shed some light on the smaller groups of the label.

My immersion into the world of Factory came with a box set that purposefully gave you a taste of their half-baked experiments right alongside their direct hits called “Factory Records: Communications 78-92.” This presentation gives a warts and all, “well we did it, so what?” kind of vibe that allows you to better accept Factory as an experiment in popular culture and not just another punk label. A number of groups on the four discs are standouts… Either by having a single then immediately bailing, or just by having some out-of-the-blue quality. Breaking away from this box set to explore other singles will have it’s rewards… It just depends on how blind you’ll be willing to be to Factory’s erratic, hit or miss output.

The Original Shadowplayers: These groups all went under Martin Hannett’s production scalpel early on and received a treatment of the same sound he employed on Joy Division albums. As a result, these groups superficially come across as JD copyists. Further listening shows that this wasn’t the case.

A Certain Ratio – The thin boys had a bit of influence on their own and the most consistently solid back catalog. After the drummerless single “All Night Party,” which couldn’t be more dour and Velvet Underground derived, they enlisted proficient funk drummer Donald Johnson and successfully forged post-punk funk. From their cover of Banbarra’s “Shack Up” and the ethereal disco-noir single of “Flight” to the albums “To Each” and “Sextet,” they were quite a formidable, danceable and arty unit. Trumpets sound, whistles blow, Jez Kerr’s bass slaps n’ pops and they even left an impression on the Talking Heads during a tour. Prime.

Crispy Ambulance – Made up of kids from more of a prog-rock background than punk, Crispy Ambulance albums sound little to nothing like their stablemates. They build expansive sonic environments on albums such as “The Plateau Phase” (which was met with harsh reviews) but their best moment is on the affecting single “Live On A Hot August Night.” That single contains “The Presence,” probably the best slab of Mancunian Kraut-damage you can come across.

Section 25 – It’s hard to say which one of these groups had the most critical bashings in the music press, but I bet it was Section 25. After their debut single “Girls Don’t Count,” they went on to record their first album which came very, very late due to Factory taking leisurely time on the album art. “Always Now” was released after Joy Division was long defunct but in retrospect contains a number of great tracks like the PiL-ish “Dirty Disco” and “Be Brave.” The album also has more of a psychedelic feel than anything Factory was producing at the time. Section 25’s brush with success would come later, midway through the 80’s with their future-forward dance track “Looking From a Hilltop.”

Other notables include Tunnelvision’s single “Watching the Hydroplanes,” which is good for a listen or two, maybe, and The Names on the single “Nightshift.” Further investigation won’t hurt, but you may get a little ambivalent.

Always in the Background: Straight post-punk wasn’t totally in Factory’s M.O. Many groups came from avant-garde fascination or more from dance music, even during the label’s earlier periods. Tony Wilson and Rob Gretton (who typically had better taste) differed when it came to musical interests, and one often lamented the other when a group worth signing was spotted… And those groups would often be signed with little marketing sense of the moment. Without being a flavor of the month in terms of sound, these groups would make beautiful albums inside and out, but in most cases only found a limited audience.

The Durutti Column – Making pensive and delicate music, Vini Reilly’s Durutti Column was always a struggling affair. Reilly was a bedsitter, often sick and couldn’t take too many touring commitments, but always produced interesting albums. Arguably, the best run for Vini came when drummer Bruce Mitchell of prog-rock group Greasy Bear joined him for the production of the album “LC.” The Durutti Column would continue on in one form or another, and Vini would eventually lay down guitar work for solo Morrissey output. What a match.

Swamp Children / Kalima – A sort of latin jazz side project by members of A Certain Ratio and siblings Ann and Tony Quigley (names that seem to personify white people jazz), projects Swamp Children and later Kalima made swinging and sophisticated dance music with a modern spin. If it wasn’t for the obvious ACR connection, they would otherwise be lost in the shuffle. That would be a shame, because they put out some great albums, especially “So Hot” and the “Four Songs” EP, respectively.

Marcel King – Once the lead singer of popular soul act Sweet Sensation, by the time Marcel had fallen in with Factory, hits were not on his side. Sweet Sensation also had an ACR connection, with members of the group being older siblings of Donald Johnson. Rob Gretton had high hopes for Marcel’s only output for Factory, “Reach For Love,” but it failed to connect with most Factory followers of the day. Marcel had turned into a tragic figure through heroin addiction and homelessness by the time the record was cut, but the single is still a great slice of electro-soul.

Oddities: Wrapping up are a few other artists that seem to be swept under the label’s rug, maybe for aesthetic reasons (or lack of a good Tony Wilson anecdote). These names are recognizable, probably because they got big after their respective Factory stints…

James – When I first heard the track “Hymn From a Village” on my Factory comp, it was probably one of my favorites. It also doesn’t seem to fit anywhere; it’s not really forward thinking pop, still angular but in an emerging indie sound kind of way before it was a norm… Check out their “Village Fire” EP for greater understanding. James became semi-well known in the U.S. thanks to the inclusion of their song “Laid” on the first American Pie movie… Obviously a way different group by that point. What a weird career arc.

Orchestral Manoeuvres in the Dark – Another band that got big and made it into a Motion Picture Soundtrack (Pretty in Pink, alongside Manchester groups New Order, The Smiths), OMD put out their very first single “Electricity” with Factory and were also produced by Hannett. In this case the production worked well with this definitive New Wave group, but apparently they didn’t care much for it. Later, at a Factory reunion show of sorts called G-Mex, OMD stripped down to a duo and only used their own original equipment to perform a thoughtful retro set for Manchester crowds… This was after their massive pop success of “(If You Leave)” and to their chagrin, they were introduced to the crowd as “two rich bastards from L.A.” by popular music scribe Paul Morley. Their association with Factory didn’t really continue much after that.

52nd Street – Without too much thought, either. Mostly known for the electro-funk single “Cool As Ice,” which has since ended up on a ton of compilations, my fave release from this jazz-funk ensemble has to be “Look Into My Eyes” b/w “Express.” This piece of vinyl has a great infectious vibe that is good natured and seems like it could have been played out at the Paradise Garage or something… 52nd Street also had (surprise!) an ACR connection by hiring Donald Johnson’s younger brother to perform bass duties. Due to that lineage, 52nd Street fell into Rob Gretton’s hands and into Factory’s convoluted history.

That about wraps it up, but there are still many acts to be rediscovered (ESG! Crawling Chaos! The Distractions!)… Once again, I’d say that the tome of “Shadowplayers: The Rise and Fall of Factory Records” and a copy of “24 Hour Party People” are probably the best and most enjoyable guides on this subject. Happy hunting! – Wade