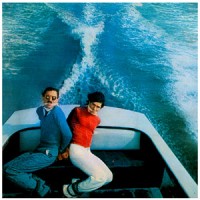 Sparks can sort of be seen in a similar light to Queen, although they ape their accents to sound quasi-Brit and ditch solos for lyrical cynicism. Maybe that’s why they have a bit of an underdog quality.

On “Propaganda,” Sparks are instrumentally tough and create simple ditties built around pop piano. The fat is cut with minimal solo’s allowed, so propulsive and repetitive tracks rule, from the mile-a-minute “At Home At Work At Play,” to the tempo-shifting “B.C.” They also make great use of the studio on “Achoo” and “Who Don’t Like Kids,” silly tunes which are grandly displayed. Why weren’t these guys signed to Discreet?

Well, despite lyrics appearing distrustful on some tracks, they were actually earnest sounding on “Never Turn Your Back on Mother Earth,” and delivered bonafide pop on “Something For The Girl With Everything.” It’s hard to really put a finger on where Sparks might be placed on your shelf, but I bet it’s somewhere near 10CC and Zappa. Especially this album, since they were still operating in top form as a band in 1974 and had not yet transformed into a New Waver two-piece… Enjoyable! -Wade