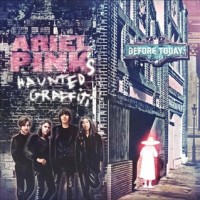 Previous releases and performances by L.A. iconoclast Ariel and his rotating players (which sometimes included R. Stevie Moore and John Maus) had a feel of pop songs gone astray, drifting into listless hiss, or maybe fragments and collages akin to Throbbing Gristle. But eventually he found the musical foils necessary to breathe new life into his bedroom rock and roll fantasies, and the results really culminated on the 4AD released “Before Today” and haven’t stopped since.

Many tracks are reworked and given a new sheen, like “Beverly Kills” and the totally anthemic “Round and Round,” and each side includes interesting choices of cover songs such as garage rocker “Bright Lit Blue Skies” and the African guitar pop instrumental “Reminiscences.” Ariel and co. string together Jackson Family-funk, power pop and soft rock songs, all of high quality. The most important change isn’t even the recording fidelity, but the fact that this may be Haunted Graffiti’s first release that comes across as a genuine album… Each track is put in it’s proper place from front to back, and despite all the genre leaps it feels like a real cohesive piece of work.

Most of these numbers would be oddly enjoyable to the average listener, but if there is any real insight into Ariel’s head it can be detected on “Menopause Man,” a sub-grooving number about being who you are, with emphasis on gender identity. Shades of Genesis P-Orridge maybe? Perhaps a few notches off… Anyway, all tracks within come across as slightly askew pervo-pop, but “Before Today” is an example of how punchy and professional Ariel and his Haunted Graffiti are these days. -Wade