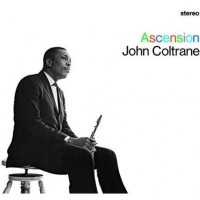 Oh boy, don’t let the opening blowout scare you, there is plenty of great form and “fun” to be had listening to this transitional album from Coltrane. Since the members recorded here run a list as long as my arm, I’ll just let you know that this was a big band of all-stars veering into free jazz like a great ship running through a tropical storm.

Crewman here can obviously play, and every last one of them went on to do great things (apart from one young trumpeter who, apparently not long after this recording, lost his mind). The album itself is made up of two long takes, two sides only. It’s the same piece performed with some solo changes. When the ensemble is working together it’s often claustrophobic, difficult finding room to breath, but just as often solos open up for a minute to two, giving each member a chance to grate their timbres.

And once in the midst of a beautiful solo from Hubbard or Tyner, or in the final duet between Davis and Garrison, you may find your own footing and wonder how you arrived where you are. A feeling you get when your overstressed mind finally makes a realization that whatever the challenge, it’s all just noise and it’s all of no real consequence. Tension and release. It’s what makes this music so appealing to those that charge on. -Wade