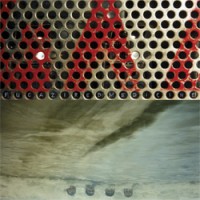 Hearing “13 Songs” today and identifying it as a punk milestone isn’t too hard. But when it was released reception was a bit different, even to the ears of folks dedicated to Dischord. Joe Lally’s dubby basslines probably had something to do with it.

After further experiments with dub production on sharp rhythms (courtesy of ex-Rites of Spring members), Fugazi took an artier route on “Red Medicine” that rocks most of the time and power-plays the studio for stints and segues. Early straightforward blaster “Bed For The Scraping” is a fun bass-propelled track that’s hard, aggressive and danceable. It’s probably the most uplifting rock track they got. Then on the production side of things, instrumentals arranged behind a board like “Combination Lock” or “Version” further push musical ideas. The trick pulled here is that these songs sound fine right alongside their rock numbers.

What makes this piece worthy of placing next to “13 Songs” or “Repeater?” It’s another fully realized album, for one, and while more musical ideas are explored Fugazi never spread themselves to thin. And while the members of this esteemed group share morals and standards set staggering high, lyrically you’ll catch a break. The album is chock full of personal political points, but delivery here is generally less declaratory, more obtuse except where it sounds great (Lockheed! Lockheed!).

On “Red Medicine,” Fugazi are miles away from where they started, with bars set even higher on playing, producing, boundary pushing… -Wade