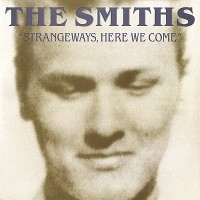 The last album by The Smiths may be the last one you’ll pick up. And while popular consensus would rank “The Queen Is Dead” and “Meat Is Murder” as their best full lengths, I’d vouch for this one. This decision didn’t come overnight, rather, it came after my formative years of Smiths-fandom in a moment of clarity, when Morrissey’s rants seemed to have less wallop but a bit more pronouncement.

Not that Steven Moz has become any less angsty on this release. If anything his wit is at it’s most refined here, just before his solo career dulled it, turning him into a caricature. His musical foil, Johnny Marr, shows off more chops than ever as well. “Strangeways…” puts the studio to use more than ever before, but don’t let that scare you into thinking this was a last-ditch effort assembled in post before the fall. Studio adventuring leads The Smiths to some of their most spacious and interesting recordings yet, like “Death of a Disco Dancer” and “Last Night I Dreamt That Somebody Loved Me.”

Lyrically, Moz touches on themes that you’ve heard before, but there is more humor here that may touch long-haul fans of Morrisey’s work rather than those jumping into Smiths albums during adolescence. The key here is time, not for wisdom gained but for longing, even for those dour times. Life is funny like that. – Wade