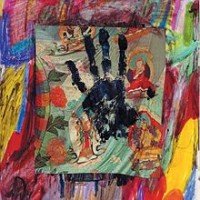 An ecstatic rush in LP form, Ponytail wound up centrifugal surf riffs with stomping drums and added one shrill singer that managed to invoke the space between Bossa starlets and Yoko Ono. While it makes since that their square one instrumentation had them opening for Battles and Hella, they didn’t come off so much as rigid math-rockers thanks to Molly Siegel’s vocal contribution and some exciting (lively!) lead guitar breakaways.

Proof of this shines through on “G Shock” and “Celebrate The Body Electric” when lead guitarist Dustin Wong actually breaks free of rhythm and indulges in solos (Hendrix is a hero of his). And for every other track he is a great foil to vocalist Molly Siegel’s joyous outbursts, while the hyperagile rhythm section churns away.

A short lived act from Baltimore that apparently put on some mad parties (one involving a Kool-Aid Man costume breaking through a wall), Ponytail delivered a rush of energy that was swirling and positive, and not such a bad thing to be drawn into. By “Ice Cream Spiritual” they were at the peak of their powers. -Wade