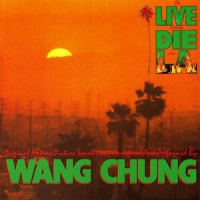 After the release of “Dance Hall Days,” Wang Chung had the fortune of being discovered by director William Freidkin, a man known for his recruitment of bands to produce film scores. Wang Chung joined the ranks of Tangerine Dream and The Germs when they scored “To Live and Die in L.A.”

They prove to be an excellent and integral part of the film, a self-aware macho action flick with plenty of action tropes set to punchy drum machines and thick synth lines… though the film’s more subdued moments show Wang Chung’s interest in classical music (use of flutes, cellos, no drum machine accompaniment). “Lullaby” is a laidback pop number with plenty of great changes for a seemingly sleek and simple number, but “City of Angles” on side two is the real track that showcases Wang Chung’s musical knowledge and modern craft. At just more than nine minutes, they provide most of the score for the entire film, and the feeling is as immersive as L.A. is expansive.

Not just a film score but a stand alone album of experimental pop, “To Live and Die in L.A.” is an OST to own if you’re a fan of synth, classical or new wave sounds. -Wade