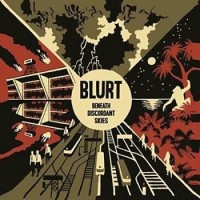 They’re back, though they never went away, really… Equal parts punk, noise performance and square-one rock racket, Blurt is a band that always has a pulse and it’s always pumping. For those that don’t know, Blurt is usually a trio run by sax player Ted Milton, and has been one of the most inventive groups to grace us from the late Seventies onward.

Normally this would be a capsule review of one record, but I have to touch on their self-titled LP and “Live In Berlin” because they are just so unique. In Manchester they were briefly on Factory and I dare say their records outshine the flashier groups like Joy Division, A Certain Ratio and the rest from that time pretty easily. Those records don’t sound the least bit dated. And as a live act, they were probably more rough and raucous than The Fall.

So here is the new one, with Ted as an old man, but he STILL sounds as inventive as ever. His playing is a unique spew and can’t be summed up as an Ayler/Ornette imitation. Lyrically he’s great and he always sounds wonderfully garbled. Longtime rhythm guitarist Steve Eagles is here. New drummer David Aylewood pumps along diligently. What more should I say? If you haven’t heard what some would call a post-punk gem, I’d give Blurt some attention. I’d also just call them a heck of a modern band. -Wade