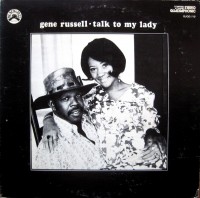 New York, Chicago, New Orleans, Fort Worth, Los Angeles… By the 70’s Jazz had gone through many form changes and developments, many defined by geographic location. Retrospect shows that these changes were refreshing; groups went electric or funky or free. But for many in the dark at the time, smaller developments unfortunately went overlooked as they veered ears toward Brubeck or Piven.

In Oakland, a small grouping of interesting musicians previously involved with Charlie Parker, Nat Adderly, Count Basie… is some fashion recorded a strange brew of music for Black Jazz Records, a small label set up by pianist Gene Russell. The label itself was one of the only active Jazz companies of the day run by African Americans. Like the Art Ensemble of Chicago, they could be political. Like Davis, they incorporated funk and soul. And like many free units of the 70’s, spirit and energy trumped virtuosity most of the time.

Active for only six years, Black Jazz ended abruptly after Gene’s passing in the early 1980s. Since then the master recordings have traded hands numerous times, and copies were used for samples by hip hop artists. Many key tracks recently ended up on a compilation curated by Detroit selector and DJ Theo Parrish (“Black Jazz Signatures: 1971-1976”), renewing interest in the label.

A little history on the movers and shakers…

Gene Russell himself made the recordings on Black Jazz happen. His best known album “Talk To My Lady” was self-released via the label and prior to that he had one obscurity lost in the shuffle from Decca. “Talk To My Lady” features a very interesting rework of “My Favorite Things” that alone is worth the price of admission…

Doug Carn was most prolific for the Oakland label in the early 70s, putting out a release typically once a year. A principal funk and soul player back in the day, his style of jazz-funk was spacey but starkly recorded in contrast to Herbie’s sci-fi releases. Theo’s compilation features his infectious “Trance Dance” track, miles away from his earlier work with Earth Wind and Fire.

The Awakening produced little but left a big impression in the way that reminds one of the Art Ensemble rhythm section, but not so much Roscoe or Lester, more like a conventional modal horn and reed format. Their work could move from tight and funky to cool. Only two albums were released by Black Jazz before they dissipated.

Calvin Keys is a real heavy hitter from Omaha, Nebraska. As a jazz guitarist he has lent his talents to Ray Charles, Ahmad Jamal, Joe Henderson, Sonny Stitt, and later even M.C. Hammer! His playing is the least free but with plenty of flaying, and he’s confidently subtle in swing. Washes of cymbal crashes are a perfect foil for his pristine R&B spillage.

Rudolph Johnson was also a Ray Charles acolyte who made a name for himself as a solid and dedicated tenor sax player. He was virtually unknown outside his crowd in Oakland, where he recorded two Black Jazz LPs. Talented in equal measure, pianist John Barnes and drummer Ray Pounds helped Johnson create maybe the most conventional but tempered music on the label.

Walter Bishop Jr. may have the highest rep, having played with Charlie Parker, Art Blakey and Stan Getz, but he only managed to put out one album as leader for Black Jazz. One turns out to be enough however: the ever desirable jazz flute is all over this LP, and an unexpected Latin influence presides. That makes it a unique release from this label already on the peripheral.