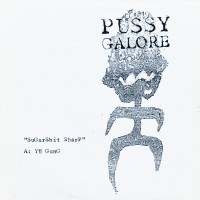 If you can only own one Pussy Galore record, make it Sugarshit Sharp*. This six-track EP represents the most potent distillation of the New York City group’s raunchy, rambunctious rock moves. It also contains the greatest Einstürzende Neubauten cover ever; “Yü-Gung.” (Some versions of Sugarshit Sharp contain a bonus track, “Penetration In The Centerfold,” originally by Devo and rendered by Pussy Galore with teeth-gnashing ferocity.)

The entire A-side of my Caroline Records copy of Sugarshit Sharp is consumed by “Yü-Gung,” which in Neubauten’s Teutonic hands was a stark, industrial nail-biter that wanted to scare the shit out of you. In Pussy Galore’s grimy mitts, the song becomes a fiery noise-rock/quasi-disco fusion, with samples from Public Enemy’s “Don’t Believe The Hype” and Rob Base and DJ E-Z Rock’s “It Takes Two” humorously surfacing amid the chaos. Jon Spencer is at the end of his tether, screaming “Feed my ego!” as he, Julia Cafritz, and Kurt Wolf crank out rusty-toned, power-chord avalanches and Bob Bert gets wicked on the drums. This was some of the wildest party music of that great year of 1988, and it still sounds rowdier than anything current indie rock’s producing.

“Handshake” is a hell-raising soundtrack for violating the speed limit and flipping off cops on freeways. Again, Pussy Galore remind us how timid and tentative most current rock sounds by comparison. “Sweet Little Hi-Fi” is so menacing and sexy, it should receive a restraining order. The part where Spencer barks in muffled tones, “Indivisible! Outstanding! Eternal! One riff!” is aptly meta and descriptive. “Brick” gives trash rock a fistful of amphetamines and a hot foot, to boot, cohering into a perfect merger of Hasil Adkins and Motörhead. “Renegade!” is another raw grunt of primal rock, in case the preceding five tracks haven’t sated you. Mercifully, this EP’s only about 18 minutes long; anything more and you’d be a mere husk of a human afterward. -Buckley Mayfield