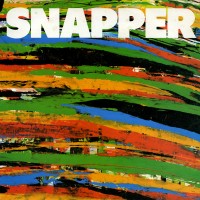 Snapper came to my attention with their 1988 debut EP; it was awed love at first hear. This was at a time when anything from New Zealand—Snapper hailed from Dunedin—carried a wonderful mystique, but here was a band that didn’t really sound like the other Flying Nun groups whose records somehow made it to the US. They radiated much more sinister vibes than did bands like the Chills, the the Clean, and the Bats.

The four songs on the Snapper EP are Möbius strips of mantric Kiwi surf rock wreathed in barbed-wire guitars and ornery organs. If you care about meticulous, traditional rock songwriting as blueprinted by the Beatles et al., Snapper will frustrate you. However, if you think the idea of British Stooges acolytes Loop jamming with synth-punk innovators Suicide is smashing, you’ll love Snapper to death.

The EP—which Captured Tracks reissued in 2013—kicks off with its best-known track, “Buddy,” which Wooden Shjips have covered live and on record. The number’s all razor-sharp organ ostinato, cut with stinging shoegaze-rock guitar and metronomic drumming, topped with subliminal female/male vocals by Christine Voice and the late Peter Gutteridge. The chorus goes, “No more buddy buddy/No more messsin’ around/I’m not gonna be your, be your fucking clown.” You’d best believe they mean it. “Cause Of You” is a full-on speed-freak rush down death’s highway. You can totally hear how this paved the way for bands like Stereolab, Moon Duo, and Thee Oh Sees.

“Death And Weirdness In The Surfing Zone” offers relentless waves of organ and guitars riding one lethal chord for the song’s duration while drummer Alan Haig does his best Klaus Dinger impression. Like everything here, it induces a kind of adrenalized hypnosis. The grinding throb of “Hang On” sounds like Suicide transposed to Loop’s psychedelic-rock grandeur, then fed a fistful of leapers. If these descriptions are becoming repetitive, well, it’s because repetition is Snapper’s lifeblood. In order to pull off this sort of monomania, you have to zero in on the most compelling chords and timbres; Snapper do that over and over. If your eyes don’t become two kaleidoscopic pinwheels by the end of “Hang On,” I feel bad for you. Gutteridge’s mantra of “You gotta feel good about doing wrong” could be his band’s motto.

Snapper’s brand of minimalist, one-chord jams that have no beginnings, endings, or many variations would sound dull in most other bands’ hands. But they found a way to turn these limitations into assets, injecting an unlikely sort of charisma into monochrome drones. Martin Rev would approve. -Buckley Mayfield