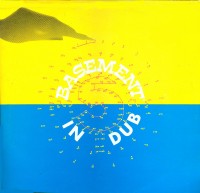 I’ve been frequenting record stores a few times a week for decades, and I’ve noticed that after the early ’80s, records by the British avant-dub group Basement 5 have become super-scarce. Which is a pity. (It’s also a pity that I didn’t have the foresight to grab those B5 releases when I had the chance.) Their idiosyncratic fusion of post-punk, dub, and strident political commentary still sounds vital 37 years after the fact. The only Basement 5 vinyl I’ve found in the wild, In Dub, offers a concise slice of the multi-racial band’s idiosyncratic take on a sound that falls somewhere between African Head Charge and PiL (B5 drummer Richard Dudanski played with the latter).

Produced by the band and Factory Records studio wizard Martin Hannett, In Dub includes studio reconstructions of five B5 tracks from their 1965-1980 LP and various singles. The A1 track, “Paranoiaclaustrophobia: Dub,” represents the EP’s peak. It stands out thanks to its psychedelic-as-hell dispersion of the original version of “No Ball Games”’s woozy, hypnotic skank. On top of that,  “Paranoiaclaustrophobia Dub” is threaded with a radiantly crunchy guitar riff that’s mirrored by one of those irrepressible, rubbernecking bass lines. I’ve spun this one out in many a DJ gig, and it always makes heads look pleasantly disoriented. Plus, it sounds killer at 33 or 45. “Work Dub” converts the boisterous ska bruiser “Hard Work” into a peppy stepper with a pneumatic bass figure that’ll get you hoppin’ gleefully.

The jagged, oblongly danceable post-punk of “Games Dub” weirdly evokes a wonkier Liquid Liquid, while “Immigrant Dub” (a reworking of “Immigration”) is a fairly traditional dub, albeit scarred with caustic, Sonny Sharrockian guitar radiation. The EP ends not with a bang, but a winner. There’s nothing horror-streaked about this “Holocaust Dub”; rather, it’s a cyclical wonder that wouldn’t sound out of place on PiL’s Metal Box—right after “Bad Baby,” perhaps.

Given our era’s love of most things post-punk and dub, it’s mystifying why no label’s done a reissue of Basement 5’s small but perfectly proportioned catalog. Let’s hope this review spurs some action on that front. (Hey, a humble blogger can dream…) -Buckley Mayfield