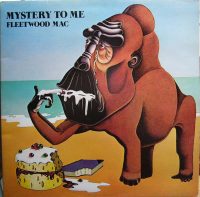 Mystery To Me is one of those sort-of-overlooked Fleetwood Mac albums that came between the Peter Green and Stevie Nicks-Lindsey Buckingham phases. Keyboardist Christine McVie and guitarist Bob Welch dominate the songwriting here; while it’s not the best pre-Rumours Fleetwood Mac album, it does contain a few serious highlights. Your enjoyment of Mystery To Me will be predicated on how much you dig Welch’s Valium’d vox, McVie’s plummy singing, and medium-cool blues rock. The strange thing about this record is that its peak, “Hypnotized,” is an anomaly in the Fleetwood Mac catalog. More about that later.

Side one stands out for a couple of McVie compositions. The peppy, catchy “Believe Me,” the most uptempo tune here, comes across very much like “Homeward Bound” off Bare Trees. “Just Crazy Love” is mildly ebullient pop that hints at Christine’s vibrant songwriting on Rumours. “Forever” shambles in on an odd reggae-rock rhythm that’s endearing almost despite itself. The rambling orchestral, quasi-flamenco rock of “Keep On Going” is unusual for bearing a McVie vocal in a Welch-written song.

Side two’s standout is “For Your Love,” as Fleetwood Mac deploy a a subtly different and dreamier rearrangement of the Yardbirds classic, bolstered by lots of dual-guitar fireworks. In “The City,” Welch explains how he can’t handle New York’s darkness, which is all around—even in Central Park, apparently—as his wah-wah guitar squawk propels a swaggeringly funky blues-rock workout. “Miles Away” is breezy, kinetic rock that makes you want to floor it as you zip down the freeway on a journey to the periphery of your mind, while Welch grinds out some seductive, highly torqued blues rock on “Somebody.”

But the real reason to cop Mystery To Me, is “Hypnotized”—which was a minor US radio hit and covered by the Pointer Sisters on their 1978 album, Energy. Urged along by a coolly detached yet insistent, rolling rhythm and colored by the chillest of spangly guitar embroidery, this song is pure proto-Balearic-beach enchantment. Welch’s mellow-bronze vocals perfectly cap this aptly titled jam. “Hypnotized” is my go-to Fleetwood Mac tune when I’m DJing in a bar and as the night’s winding down and I’m trying to lay the foundation for its boozing patrons to get laid.

Overall, Mystery To Me is a slow-grower that boasts a few cuts that belong on any Fleetwood Mac best-of mixtape. You should still be able to find a used vinyl copy for under $10. -Buckley Mayfield