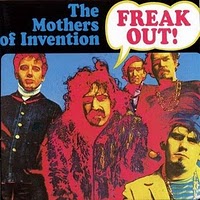 This is a true album for freaks. Back in 1967, Zappa must have felt left out of the hippy dippy counterculture because his musical interests seemed to extend beyond flowers in your hair, acoustic guitars and sitting barefoot in the park. So with this debut he in turn created a counterculture to the counterculture – an album for all the freaks and “left behinds” as he refers to them in the opening track Hungry Freaks Daddy. The music is frequently upbeat, jazzy and conventional, at least by Zappa’s standards. He had not yet started his long guitar explorations of later albums, and the only real “surreal” tracks are Who Are The Brain Police?, Help I’m A Rock, and the truly whacked out closer The Return Of The Son Of Monster Magnet. It’s these more experimental tracks that most intrigue me just in their sheer ludicrousness. They all sound like drug induced paranoia with their screaming, sound effects and seemingly made up language. –Neal