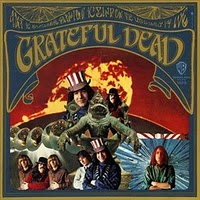 The Dead were never a studio band, and their first record is even overlooked by the most ardent Deadheads. It’s easy to see why; here they sound more like a garage band: raw, loud, way fast, and with only one drummer! Recorded in LA, it’s rumored that the band cut these tracks in just a few hours while hopped up on Ritalin (an irony considering the superhuman attention span required for the long-winded jams of their later years). The opener, “The Golden Road…” sets the momentum for a series of short, bluesy, breakneck tempo numbers that don’t slow down until the beginning of Side Two: a cover of Bonnie Dobson’s post-apocalyptic “Where is everybody?” ballad, “Morning Dew”. But even here there’s a sense of visceral urgency that the band seldom recaptured on stage or off. The closing prison song cover, “Viola Lee Blues”, more closely resembles the exploratory and improvisational sound that would soon become their stock in trade, but with just enough sloppiness and dissonance to keep things interesting. From here, the Dead would inarguably record and perform some more great music while vocalist/organist Pigpen still had his liver, but never again with such reckless abandon. –Richard P