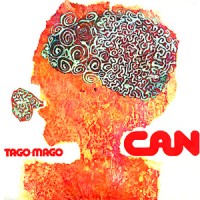 Out with Malcolm Mooney and in with Damo Suzuki. At this point, the grooves provided by the most well known forerunners of Krautrock got a whole lot funkier… On “Tago Mago” these composers-turned-avant-rockers set a template that still influences musicians and electronic artists to this day with their strange brew of rhythms and sound collage.

“Paperhouse” and the oft-covered “Mushroom” open the album with more standard pastoral psych numbers and Velvet-drones, but the album turns on it’s head with “Oh Yeah” and “Halleluwah,” tracks that seem to last an eternity with simple relentless grooves and studio trickery (backwards voices, fade ins/outs, on the fly mixing). Mushroom head indeed.

This is Can’s second breath with Damo on the mic, and his style of vocalizing is unique unto himself. A mix of English, German, Japanese and gibberish, it all goes together in seamless coos, belted screams and “uh huh” nonsense. It’s rock, it’s avant, it stands the test of time… And you can dance to much of it. -Wade