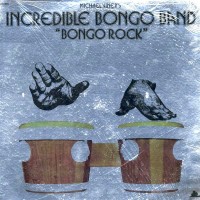 Incredible Bongo Band sure had incredible bongos, but they weren’t really a band, per se. Rather, Pride Records executive Michael Viner coaxed various musicians to record percussion-heavy instrumentals, including covers of many popular songs of the ’50s, ’60s and ’70s and pieces for films in order to, uh… make some easy money. Thankfully for posterity (and your posterior), these players ranked among the greatest session studs ever: drummer Jim Gordon, percussionist King Errisson, guitarist Mike Deasy, pianist Joe Sample, bassist Wilton Felder, and many others—possibly even Ringo Starr. The sessions may have had a loose, mercenary intention to them, but they ultimately yielded some truly enduring cuts.

You surely know the popular tune “Apache,” which the Shadows originally issued in 1960. Well, IBB blew it out and funked it up like nobody’s business. The result is one of the most action-packed jams ever waxed and perhaps the ultimate B-boy anthem, its bongos-and-drums breakbeats forming the perfect bustling soundtrack to busting acrobatic moves. In addition, “Apache” has become one the most sampled tracks in music history, especially appealing to hip-hop and drum & bass producers. If you can’t hear why, you may need therapy.

The rest of Bongo Rock is similarly a treasure trove of breakbeats aching to be sampled and instantly catchy, quasi-kitsch instrumentals that want to enliven every party everywhere till the end of time. I mean, check out “Bongolia,” a swerving monster of a tune with flamboyant horn charts, swift bongo patter, and 10 pounds of funk in a 5-pound bag. It’s a veritable godsend for DJs; its only fault that is that it las barely over two minutes. “Last Bongo In Belgium” slurs out some lascivious blues rock with a funky swagger and what sounds like Mike Deasy going off on a third-ear-tickling, psychedelic guitar solo. Yes, the Beastie Boys sampled the drum/bongos break for “Looking Down The Barrel Of A Gun.” Good catch.

Of course IBB do a truncated but funked-to-heaven and horn-heavy cover of Iron Butterfly’s gothadelic 1968 hit, “In-A-Gadda-Da-Vida.” And of course it possesses a very sample-worthy bongo/drum break, replete with flange on the latter. They’re generous like that. The last two tracks—“Raunchy ’73” and “Bongo Rock ’73”—sound like sexed-up, hot-rodding themes to TV game shows that are more risqué than The Dating Game (ask your mom or dad). Once again, there’s a surfeit of funkitude and more fun than should be legal on a 35-minute album. All praises to the visionary Michael Viner and his funky instincts! -Buckley Mayfield