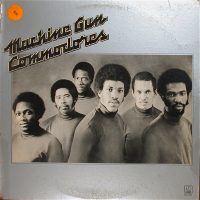 Commodores’ debut album is a stone funk classic. Devoid of the sappy ballads that made them beloved with suburban, mainstream folks and companies that pipe music into retail establishments and medical offices, Machine Gun bursts with lubricious groove science.

Right from the off, the title track glides into one of the smoothest clavinet-powered, pimp-roll rhythms ever cut, then gets festooned with flamboyant analog-synth oscillations, chikka-wakka guitar, and minimalist, grunting bass. An instrumental that the Beastie Boys (and their producers, the Dust Brothers) had the good sense to sample for “Hey Ladies,” “Machine Gun” is practically glam in its flashy gestures, its extravagant strut. The track reached #22 on the charts; not bad for a funk instrumental. That it appeared in the porntastic 1997 film Boogie Nights should not surprise anybody with a libido.

The rest of Machine Gun finds myriad ways to exploit said libido through funk’s manifold, malleable rhythmic tricks. The lascivious, loitering, and not a little creepy “Young Girls Are My Weakness” foreshadows Commodores’ smash 1977 hit “Brick House,” while “I Feel Sanctified” and “The Bump” stimulate party muscles in a very effective manner. The lyrics won’t win any Nobel or Pulitzer prizes, but they get the job done, allowing future solo star Lionel Richie to get his dirty-young-man ya-yas out. Another fantastic, clavinet- and synth-enhanced instrumental joint, “Rapid Fire,” closes the LP’s first side.

Side two opens with “The Assembly Line,” an oft-sampled, slow-blooming explosion of soulful euphoria written by Gloria Jones and Pam Sawyer that recalls Anglo-Caribbean greats Cymande [see my review of their 1972 debut album in Jive Time’s archives]. Though it starts with a parody of circus music, “The Zoo (The Human Zoo)” is Machine Gun‘s most socially conscious song, and it went on to become a favorite on the Northern soul circuit, but with “Gonna Blow Your Mind,” we’re back to decadence in excelsis, with an intimate boudoir-funk jam. “There’s A Song In My Heart” harks back to “The Assembly Line”’s easygoing sunniness, while LP-closer “ Superman” is an urgent bustle of extroverted funk, blown out to aptly superheroic dimensions to match the titular subject.

Without a doubt, Machine Gun is essential for funk aficionados, and, low-key, it’s one of the highlights of Motown’s 1970s discography. To quote one of their best-known tunes, it’s “mighty mighty, just lettin’ it all hang out.” -Buckley Mayfield