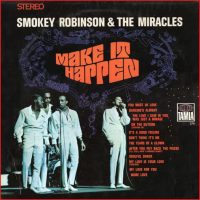 There’s something slightly quaint about even the greatest Tamla/Motown releases from 1967 and earlier, as heard with 21st-century ears. The psychedelic movement hadn’t yet hit Berry Gordy’s radar in a meaningful way, and funk had yet to gather serious momentum, so the legendary label was still pushing the straightforward, orchestral-soul formula that had made it world-famous and widely loved. Even a sophisticated composer and sublime vocalist like Smokey Robinson seems a bit trad more than 50 years on from the release date of this solid LP, Make It Happen. But there is one tune on this record that eludes the era’s trappings and represents a pinnacle of songwriting that transcends all. More about that later.

Loaded with endearing, romantic ballads (five songs have the word “Love” in the title, the best of them being swoon-inducing yet heartbreaking “The Love I Saw In You Was Just A Mirage”—“sweetness was only heartache’s camouflage/the love I saw in you was just a mirage”), Make It Happen showcases Smokey’s gorgeous, honeyed vocals—perhaps the epitome of androgynous R&B expressiveness. And then there are the Northern soul dancers like “My Love Is Your Love (Forever),” “You Must Be Love,” “Dancing’s Alright,” and “The Soulful Shack,” all of which glide with that patented Motown effortless grace, putting a ridiculously sprightly spring in your step.

But as lovely as all those songs are, they cannot compare to “The Tears Of A Clown.” Hundreds of listens to it have convinced me that it is perhaps the greatest song ever written. I know, huge claim. But I’m utterly serious. With music by Stevie Wonder and Hank Cosby and words by Mr. Robinson, “Tears” has been riveting me ever since I heard it on the radio when I was 8. We often blithely say certain things “never get old,” but I can assert with every fiber of my being that this is the case with “Tears.”

Lofted skyward by that helium-powered, circus-friendly calliope motif, “Tears” is the ultimate ebullient music/sad lyrics song (take that, Morrissey/Marr). The pell-mell rhythmic propulsion, that one flat tuba chord, spine-tingling keyboards, and the champagne-supernova backing vocals seem to assure you that everything’s groovy to the max, but Smokey’s genius words paint a picture that’s 180º opposed to the sonic levity. Every verse is a masterpiece that reinforces the theme of the singer not letting “glad expression” give you “the wrong impression.” I look forward to another 5,000 listens.

(In 1970, Tamla reissued Make It Happen under the title The Tears Of A Clown to capitalize on the title track’s stunning radio success. Somehow, those savvy marketing cats at one of history’s most lucrative record companies didn’t think “Tears Of A Clown” had hit potential upon its initial release. We should never stop shaking our damn heads over this music-biz fail.) -Buckley Mayfield