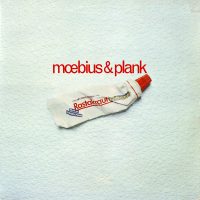 The late Dieter Moebius could do no wrong. A crucial member of Cluster, Harmonia, and Liliental, and a collaborator with Brian Eno, Max Beerbohm, Mani Neumeier, Asmus Tietchnes, Red Krayola’s Mayo Thompson, and many other mavericks, Moebius always brought a peculiar tonal vocabulary to any studio situation He never stopped trying new things and maintained high quality control to the very end of this life—a true rarity.

One of his key conspirators was the renowned krautrock producer/engineer Conny Plank. Along with Guru Guru drummer Neumeier, both German geniuses recorded the mind-boggling Zero Set, which was way ahead of its time (and which I hope to review eventually). In the meantime, let’s examine Moebius and Plank’s first full-length, Rastakraut Pasta, which thankfully isn’t quite as goofy as its title.

Moebius met Plank when the latter served as engineer for Cluster 1971. They hit it off and meshed their peculiar sensibilities on Rastakraut, which reveals the more whimsical side of the two musicians’ talents. (CAN’s Holger Czukay plays bass on three tracks here.) The LP title reveals the underlying sonic theme: a bizarre melding of Jamaican and Teutonic musical elements. “News,” the title track, and “Miss Cacadou” dabble with drunken dub and reggae structures, their woozy skank always threatening to capsize into a Caribbean Sea filled with molasses rather than water.

On “Two Oldtimers,” which features Czukay, Dieter and Conny finesse a lollygagging electro-pop that’s as dreamy as these sagacious Germans ever got—until it unexpectedly turns all solemnly neo-classical. “Solar Plexus” is the album’s strangest piece; it seemingly consists of a tuning fork and synth murmurs Doppler effected into a weird splaying of tones and warped mumbles. The main motivation behind it appears to be to fuck with your reality while you’re tripping. Face it: We all could use some tracks like this in our lives.

The album’s anomaly and peak occurs on “Feedback 66” (which also includes Czukay). This is surf-rock submerged in tar, its rhythm seemingly clipped from that monotonously funky kickdrum from Sly & The Family Stone’s “Dance To The Music,” and then slowed way down. Again, it’s produced to mess with your mind in an insidious manner, which is why I love to drop it in DJ sets. “Feedback 66” is one of Moebius and Plank’s greatest achievements of their storied careers—and it’s worth the price of admission alone.

Praise Jah that that price of admission won’t be exorbitant, as the excellent Bureau B label reissued Rastakraut Pasta on vinyl in 2010 and again in 2017. -Buckley Mayfield