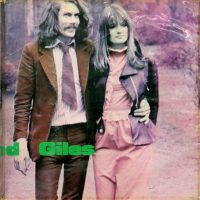 McDonald And Giles sounds like the name of a high-level law firm, but it actually was the evanescent project of multi-instrumentalist Ian McDonald and drummer Michael Giles, who played on King Crimson’s groundbreaking 1969 LP, In The Court Of The Crimson King. (Michael’s brother Peter plays bass on McDonald And Giles.) They left the band following a US tour that year, although Michael Giles helped out on King Crimson’s second album, In The Wake Of Poseidon. It was one and done for Ian and Michael, but oh what a relic they left behind.

McDonald And Giles begins with the multi-part epic “Suite In C,” which exudes an elegance and pulchritudinous intricacy that were the province of British prog-rock musicians of the late ’60s and early ’70s. What I mean is, there was a post-Sgt. Pepper’s frou-frou quality that mated with the folkadelia of Pentangle, Incredible String Band, and Fairport Convention to form a pastoral, beatific sound that transported you to Elysian Fields—but in a very circuitous manner. This was beyond the ken of Americans. Although there is a point at 7-and-a-half minutes in when the song swerves into a parody of old-timey genres à la the United States Of America’s “I Won’t Leave My Wooden Wife For You, Sugar,” so I contradict myself. Sorry.

“Flight Of The Ibis” is startlingly similar to KC’s lilting, gorgeous ballad “Cadence & Cascade,” but “Ibis” is even more sublime and as fragilely spectacular as peak Left Banke. Somehow, Giles just nudges out Greg Lake for vocal poignancy. Whenever I play this zither-enhanced tune in a DJ set, I’m disappointed when the whole bar or club isn’t in tears and hugging one another. Similarly, “Is She Waiting?” is a melancholy ballad with spindly acoustic guitar and piano that can hold its own with the Zombies, Moody Blues, and White Album-era Beatles.

McDonald And Giles‘ zenith is the Giles-penned “Tomorrow’s People – The Children Of Today,” which contains some of the most robust, funky drums in prog history. No wonder the Beastie Boys sampled it for “Body Movin’”; it’s surprising more hip-hop producers haven’t leveraged its meaty hits. McDonald’s flute takes flight in a display of rococo jauntiness while Michael Blakesley’s trombone and McDonald’s clarinet form soar in an incomparable effusion of optimism. We could all benefit from shooting this horn chart into our veins daily.

The 21-minute suite “Birdman” features former KC lyricist Peter Sinfield scripting another many-tentacled composition, this time about a man who learns how to fly. This is one of those sidelong marathons that flaunt McDonald and Giles’ prog inventiveness and eclecticism (freakbeat, jazz, churchy organ prog, orchestral soundtrack bombast, etc.). It’s not all amazing, but the ambition is breathtaking.

If you dig the first two King Crimson albums, you should check out McDonald And Giles—and maybe sample that killer drum break in “Tomorrow’s People” while you’re at it. -Buckley Mayfield