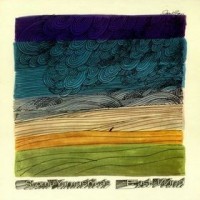 Japanese percussionist/composer Stomu Yamash’ta settled in England in 1972, after studying music in his native country and later in the USA. He worked mainly as a composer for theatre music, but his signing as a recording artist for the Island label brought his work to the attention of a wider audience, which later led to him forming the group East Wind, which recorded this exceptional album. Combining forces with some of the best British musicians at the time, the band included Yamash’ta on drums and percussion, his wife Hisako on violin, guitarist Gary Boyle (Isotope), keyboardist Brian Gascoigne, and bassist Hugh Hopper (Soft Machine). The music is a wonderful fusion of Western and Far Eastern elements as well as many cross genre excursions, from atmospheric ambient to high spirited Jazz-Rock Fusion. Although Yamash’ta became mostly known for the “Go” recordings featuring Traffic’s Steve Winwood, a few years later, this is truly his most remarkable album recorded for Island and the one that withstands the test of time most adamantly. Wholeheartedly recommended! —Adam